Homily (Reflection) for the Memorial of Saint Ignatius of Loyola (31st July, 2018) on the Gospel and the Memorial 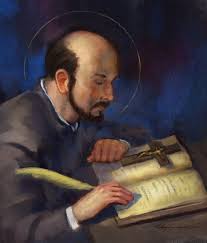 Saint Ignatius of Loyola (1491- July 31, 1556) fought several battles as a soldier. In 1521, he was struck by a cannonball in the legs. He underwent several surgeries without anaesthetics. At a point, he was asked to prepare for death. However, on June 29, 1521, the feast of Saints Peter and Paul, he began to improve. Ignatius started to read the lives of the saints and Christ. Among his profound realizations was that some thoughts brought him happiness and others sorrow and that two powerful forces were acting upon him. Evil brought him unpleasant thoughts while God brought him happiness. He discerned God's call, and began a new way of life, following God instead of men. On March 25, 1522, he entered the Benedictine monastery. His time in prayer and contemplation helped him to understand himself better. He also gained a better understanding of God and God's plan for him. He became friends with Peter Faber and Francis Xavier while at school in Paris and led them in his spiritual exercises. Other men soon joined their exercises and became followers of Ignatius. Pope Paul III received the group and approved them as an official religious order in 1540. Ignatius was elected as their first leader. They called themselves the Society of Jesus. Some dubbed them “Jesuits” in an attempt to disparage them. By virtue of their good work the label lost its negative connotation. The order was responsible for much of the work of stopping the spread of the Protestant Reformation. They advocated the use of reason to persuade others and combat heresy. Ignatius was beatified by Pope Paul V on July 27, 1609 and canonized on March 12, 1622. He is the patron saint of the Society of Jesus, soldiers, educators and education.[1]
Topic: ...the furnace of fire.
Jesus’ disciples approached Him in today’s gospel with a request to explain to them the parable of the weeds of the field which we read last Saturday. He said to them,
The one who sows the good seed is the Son of Man; the field is the world, and the good seed are the children of the kingdom; the weeds are the children of the evil one, and the enemy who sowed them is the devil; the harvest is the end of the age, and the reapers are angels.
All causes of sin and all evil doers will be gathered and thrown into the furnace of fire, where there will be weeping and gnashing of teeth. On the other hand, the righteous will shine like the sun in the kingdom of their Father, cf. Dan 12:3.
Often, when we meet this furnace of fire where all the causes of sin and all evil doers will be thrown into, we pass it unnoticed. It is impossible to explain this in mortal language because every fire we experience results from the goodness of God, cf. Gen 1:31. And whenever it goes wrong, the fire service can assist. Yet no right-thinking human dares to play with even as little as the light of a candle.
The furnace of fire was ignited by God’s anger for torment, cf. Rev 14:10. And no fire service can assist because it can never be quenched, cf. Mk 9:48. Prophet Nahum questions, “Who can stand before his indignation? Who can endure the heat of his anger? His wrath is poured out like fire, and the rocks are broken asunder by him” (Nah 1:6). And our Lord warns,
If your right eye causes you to sin, pluck it out and throw it away.... if your right hand causes you to sin, cut it off and throw it away; it is better that you lose one of your members than that your whole body go into hell (Matt 5:29-30).
The furnace in question is not bearable. Let us therefore follow the example of Saint Ignatius of Loyola and prove ourselves as the children of the kingdom. Whoever fails to do so will have him/herself to blame.
Bible Reading: Mk 9:42-48.
Thought for today: All causes of sin and evil doers are destined for the fires of hell.
Let us pray: Lord, through the intercession of Saint Ignatius of Loyola, help us to avoid the furnace of fire – Amen.
Saint Ignatius of Loyola – Pray for us – Pray for us.
You are free to share this reflection with others if you consider it worthy.