Mk 6:1-6.
One day, two women, Mary and Ann, met along the road. Mary was coming from the direction of the church while Ann was going towards the direction. This is part of their conversation:
Ann: Mary, are you coming from the church?
Mary: Yes, my dear.
Ann: Do you know whether the priest is still at the confessional?
Mary: [She hummed] No, the priest has left but the son of Okeke was still there when I left the church.
One might ask, ‘Who was Okeke’s son at the confessional?’ This incidence took place when the white missionaries were still many doing missionary works in Nigeria. Although the pioneer indigenous Catholic priests had began to emerge, but the people were still very sceptical about them. The son of Okeke was one of those early Nigerian Catholic priests. Many found it very difficult to accept them as priests.
Topic: The problem of origin. 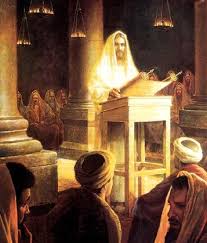 We read how Jesus visited his hometown in today’s gospel,
With the coming of the Sabbath he began teaching in the synagogue, and most of them were astonished when they heard him. They said, ‘Where did the man get all this? What is this wisdom that has been granted him, and these miracles that are worked through him? (Mk 6:2, TNJB).
Although the people were overwhelmed but there was a serious obstacle for them – Jesus was seen as one of them, cf. Matt 1:1-25; Rom 1:3-4. Hence, even in their astonishment they queried, “‘Is not this the carpenter, the son of Mary and brother of James and Joses and Judas and Simon, and are not his sisters here with us?’ And they took offence at him” (Mk 6:3). It is clear that the problem was not with what was said and done but with who said and did them.
Jesus told us in the gospel, “He who receives you receives me, and he who receives me receives him who sent me” (Matt 10:40). In the same vein, “He who hears you hears me, and he who rejects you rejects me, and he who rejects me rejects him who sent me” (Lk 10:16). And in the book of Genesis chapter 18 Abraham welcomed the angels unknowingly, cf. Heb 13:2. And many God’s choicest blessings followed.
On the other hand, the Nazarenes rejected Jesus, their brother, their friend (cf. Jn 15: 13, 15; Lk 12:4), and their God, (cf. Jn 13:14). And
Jesus said to them, ‘Prophets are not without honour, except in their hometown, and among their own kin, and their own house.’ And he could do no deed of power there, except that he laid his hands on a few sick people and cured them (Mk 6:4-5).
Jesus “... descended from David according to the flesh” (Rom 1:3). And as such, the Jews ought to know Him better than the rest of humans. Although they had waited for the coming of the messiah for a very long time before the coming of Jesus Christ but they failed to recognize and accept Him because they expected and many are still expecting a saviour nobody would know his background, cf. Jn 7:27. We still pray for the Jews to recognise Jesus as the long-awaited saviour. On the other hand, they pray and wait for the coming of a saviour whose background would not be known.
It is very easy for one to condemn the Nazarenes who rejected Jesus in today’s gospel and the people who failed to accept their brother (the son of Okeke) as a priest. But are we different? Many towns, families, individuals, etc are still very backward in a lot of areas despite the fact that they have great men and women with ability and willingness to transform them. Sometimes these people are not regarded as anything in their hometowns, villages, families, etc. And just like what happened at Nazareth, many who could have brought transformation do little or nothing.
Let us conclude with another story,
“An old man is sitting on his porch, when suddenly someone drives up in a jeep, yelling, ‘Quick! Get into my jeep! The dam just burst, and this whole place is going to be flooded!’
“The old man says, ‘Naw, you just go ahead. The good Lord will take care of me!’
“Now someone paddles by his window in a canoe and says, ‘Quick! Get into my canoe! The water is going to keep rising!’
“The old man says, ‘Naw, you just go on ahead. The good Lord will take care of me!’
“The water keeps rising. The old man drowns. The old man finds himself before the Lord in Heaven. The old man says, ‘How could you let me drown! [Sic] I trusted you!’
“The Lord says, ‘Hey, I tried. I sent a jeep and a canoe for you!’” (Thomas, T. (2010). Spice up your homilies. Mumbai: St Pauls, pp. 105-106).
On our own part, just like the Jews, saviours have been sent to us several times. How well did we receive them? There is no gain saying that many of these saviours were rejected and some were even dishonoured because they were “well-known” to those they were sent. Even those people that are not regarded as anything, are among the saviours sent to us. It is left for us to either accept or reject those saviours sent to us because we think we know them very well and also either carry out our duties as saviours to others as well or leave them.
Bible Reading: Matt 10:40-42; 25: 31-46; Jn 7:25-31, 40-52; Acts 13:13-41.
Thought for today: How often have you disregarded others because of their background?
Let us pray: Jesus Christ, our Lord, by the rejection you suffered in the hands of your brothers and sisters, help us never to look down on anybody because of his or her background. May we see you and receive you in all we meet today and all the days of our lives – Amen.
You are free to share this reflection with others if you consider it worthy.