Topic: No Matter the situation.
Jesus was by the sea with the people who gathered around him when,
...one of the leaders of the synagogue named Jairus came and, when he saw him, fell at his feet and begged him repeatedly, ‘My little daughter is at the point of death. Come and lay your hands on her, so that she may be made well, and live’ (Mk 5:22-23).
The condition of the little girl was really bad at the time Jairus left her. As if that was not enough, Jesus was still on His way when “... some people came from the leader’s house to say, ‘Your daughter is dead. Why trouble the teacher any further?’” (Mk 5: 35). They thought that it was useless bringing Jesus forgetting that we should trust in Him at all times and pour out our heart before Him because He is a refuge for us, cf. Ps 62:8. 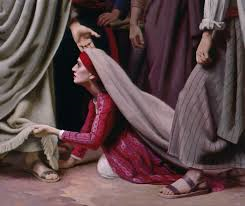 Before the arrival of the people who brought the news of Jairus daughter’s death another figure came into the scene, “a woman who had been suffering from haemorrhages for twelve years. She had endured much under many physicians, and had spent all that she had; and she was no better, but rather grew worse” (Mk 5:25-26).
Just like Jairus who set out in search of Jesus for the cure of his little daughter, this woman who had heard about Jesus said to herself: “If I but touch his clothes, I will be made well” (Mk 5:28). Both Jairus and this woman seemed to have realised one reality before setting out in search of Jesus: “... vain is the help of man” (Ps 60:11; cf. Ps 108:12).
The letter to the Hebrews reads: “And without faith it is impossible to please him. For whoever would draw near to God must believe that he exists and that he rewards those who seek him” (Heb 11:6). Hence when it looked like nothing could save Jairus’ daughter, Jesus said to Jairus: “Do not fear, only believe” (Mk 5:36) because nothing is impossible for him, cf. Matt 19:26; Mk 10:27; Lk 1:37; 18:27. And when the woman “...came in fear and trembling, fell down before him, and told him the whole truth. He said to her, ‘Daughter, your faith has made you well; go in peace, and be healed of your disease’” (Mk 5:33-34).
My dear brothers and sisters in the Lord, what difference does your presence make or do you prefer to be just part of the crowd? Does your coming to church today make any difference or just one of those who come to church either because you are used to coming to church every Sunday, an opportunity to see someone or some people, and so on? Our brother Jairus and our sister who had suffered haemorrhages for twelve years ran to Jesus, where do you run to when the situation is really critical? It is important to note that although the crowd was pressing in on Jesus, He was able to notice that that woman touched Him. Hence the disciples were surprised at his insistence on finding who touched him but that was done with faith. There is no doubt that many if not all will say that they have faith in God.
We conclude with this story about a mountain climber. “The mountain climber, 4000 ft up the side of Mount Everest, suddenly slips. In a last ditch effort to save himself, he grabs at a small plant, protruding from the rocks and hangs on precariously. Not usually a religious man he decides this might be a good time to try prayer. Frantically clutching the plant he turns his head toward the heavens and says, ‘God, if you are up there, save me! I’ll do anything you say.’
“After a moment of silence a voice booms from above: ‘Do you have complete faith in me?’
“The climber replies: ‘Oh yes, I do. I’ll do anything you say.’
“God then says: ‘Take one of your hands off the plant.’
“The climber amazed gives it some thought and then quite reluctantly let’s go one hand. He says, ‘Okay God. I showed you I have faith. Now please save me.’
“There is a moment of silence. Then God says, ‘If you really have faith, let go the other hand also.’
“The climber looks up incredulously and asks, ‘What?’
“God replies, ‘Let go the other hand also.’
“After a moment of thought, the climber looks skyward and says, ‘Ah, excuse me, God, is there anyone else up there I could talk to?’” (Sagayanathan, A. (2009). Launching pad: Stories for Sunday Homilies year – A, B & C. Bangalore: Asian Trading Corporation, pp. 199-200).
It is Christ himself who tells us, “Come to me, all who labour and are heavy laden, and I will give you rest” (Matt 11:28). And we hope for all our needs from God, cf. Matt 6:11; Lk 11:3; Ps 104:27. We must have strong faith in God No Matter the situation because “those who trust in the LORD are like Mount Zion, which cannot be moved, but abides forever” (Ps 125:1). And the prophet rightly proclaims: “Blessed is the man who trusts in the LORD, whose trust is the LORD” (Jer 17:7).
Bible Reading: Matt 11:28-30; Heb 11:1-40; Ps Ps 125; Ps 126.
Thought for today: When the situation looks really bad where do you turn to?
Let us pray: God, you are the giver of faith. Give us strong faith that will enable us to stand firm no matter how bad the situation is – Amen.
You are free to share this reflection with others if you consider it worthy.