I believe you must have heard the story of a young lady whose boy friend promised to give a very special gift on her birthday. That promise became the headline of most of her discussions especially while inviting her friends to her birthday party. Some of her friends decided to go to the party just to behold the gift that worth to be qualified with “very special”.
On the appointed day, the venue for the party was filled with both invited and uninvited guests. But her boy friend was conspicuously absent. Each time he was called on phone he always asked for a little more time to get the very special gift ready. The young lady’s desire to receive the gift kept increasing.
After a long time of waiting, he called and told her that they could start the party because he was no longer too far from the venue. Reluctantly she agreed but her boy friend never came until during the presentation of gifts. He came in sweating profusely and briskly went to his girl friend, while on his knees apologising he gave her something in a black nylon bag. All the guests looked on to see the very special gift. As she could no longer wait for a second further, she hastily opened the bag and behold it was a loaf of bread. With a sternly frowned face she asked him whether that was the very special gift and he nodded. All the effort to calm her down was fruitless. She not only threw it out through the window but also pushed him out. The man after much fruitless pleading went and picked it. He opened the loaf of bread before all of them and brought out a car key and an engagement ring among other things he buried in it. The young lady realising how foolishly she had acted pleaded on her knees with eyes filled with tears, but they were very late.
Topic: Appreciate whatever you have. 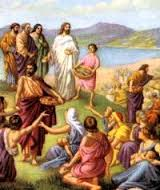 The crowd who followed Jesus were impressed by the signs He did in curing the sick, cf. Jn 6:1. In verse 10 the gospel approximates the number to be as many as five thousand men. And the gospel according to Saint Matthew is more explicit that this large number excludes women and children, cf. Matt 14:21. Just approximate the proportion of men, women, and children in this church. If the number of people in this church is to be increased proportionally, how many women and children do you think will be here by the time the men are up to five thousand?
The magnitude of the responsibility of feeding the crowd is captured in Philip’s reply to Jesus’ question rendered in different ways by different translators. In The New Jerusalem Bible: Standard edition, it reads: “Two hundred denarii would not buy enough to give them a little each” (Jn 6:7). And according to The Holy Bible: The New Revised Standard Version, a denarius was the usual day’s wage for a labourer. This is supported by the parable of the labourers in the vineyard: “He made an agreement with the workers for one denarius a day ...” (Matt 20: 2). On the other hand, The Holy Bible: The New Revised Standard Version translates Philip’s reply in these words: “Six months wages would not buy enough bread for each of them to get a little” (Jn 6:7). And in the Life Application Study Bible Philip’s reply is: “Even if we worked for months, we wouldn’t have enough money to feed them!”
Andrew took a step further by acknowledging that “There is a boy here who has five barely loaves and two fish” but he quickly concluded: “But what are they among so many people?” (Jn 6:9). In both Philip’s and Andrew’s statements, one sees the thinking of people operating at the level of earthly wisdom, cf. Jas 3:15. But we are called to look upwards, cf. Matt 5:48. In verse 11 of today’s gospel, we see that when Jesus took the loaves and the fishes instead of throwing them away like the young lady we saw in our introductory story, He gave thanks and distributed them to the crowd.
We read in the gospel according to Saint Luke: “He who is faithful in a very little is faithful also in much; and he who is dishonest in a very little is dishonest also in much” (Lk 16:10). In the same vein, one who does not appreciate what he/she has or is given, the whole world at his/her disposal will not guarantee he/she being appreciative. Taking the life of women as a case study, when a woman is still very tender, her wish normally is to grow up. Before she could be fully grown, she will switch over to what she will be in life, and so on.
My dear ones in the Lord, one can easily argue that what happened in the gospel was just a miracle. Yes, a miracle but that God is still God. Again, that miracle can still take place today through you and me but we must learn first how to acknowledge and appreciate what we have and what we are: “... the birds of the air ... neither sow nor reap nor gather into barns, and yet your heavenly Father feeds them. Are you not of more value than they?” (Matt 6:26). So my dearest in the Lord, before you throw it away, please check well to avoid throwing away “very special gifts”.
Bible Reading: Matt 6:25-34; Lk 16:1-13; 19:11-27.
Thought for today: Appreciate everything not minding the size or seemingly insignificant.
Let us pray: Lord, you are the source of all that is good and you apportions to each as you will (cf. 1Cor 12:11). Give us the grace to always appreciate Your gifts in us and in our brothers and sisters – Amen.
You are free to share this reflection with others if you consider it worthy.