Homily (Reflection) for the Memorial of Saint Alphonsus Liguori, B.D (1st August, 2018) on the Gospel and the Memorial 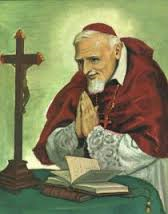 Saint Alphonsus Liguori (September 27, 1696 - August 1, 1787) was raised by a devout mother. He received his doctorate at the age of sixteen but later dropped secular life and was ordained on December 21, 1726. Saint Alphonsus founded the Congregation of the Most Holy Redeemer (Redemptorists) on November 9, 1732. He obeyed the papal command to accept the see of St. Agatha of the Goths near Naples in 1762. For thirteen years he fed the poor, instructed families, reorganized the seminary and religious houses, taught theology, and wrote. His austerities were rigorous, and he suffered daily the pain from rheumatism. In 1780, he was tricked into signing a submission for royal approval of his congregation which altered the original rule. Alphonsus was beatified in 1816, canonized in 1839, and was declared a Doctor of the Church by Pope Pius IX in 1871. His writings on moral, theological, and ascetic matters especially his Moral Theology and his Glories of Mary had great impact and have survived through the years. He is the patron of confessors, moral theologians, and the lay apostolate.[1]
Topic: Value of the Treasure/Pearl.
Today’s gospel consists of two parables about the kingdom of heaven, treasure hidden in a field and pearl of great value. The person who discovered the hidden treasure in his joy went and sold all that he had and bought the field. Likewise, the merchant who found the pearl of great value sold everything he had and bought it.
The value of the treasure and the pearl that made both men put all their eggs in one basket is worth meditating on. Saint Paul wrote,
...I regard everything as loss because of the surpassing value of knowing Christ Jesus my Lord. For his sake I have suffered the loss of all things, and I regard them as rubbish, in order that I may gain Christ (Phil 3:8).
We recall that these parables are about the kingdom of heaven. The actions of those men and that of Saint Paul among so many others tell us that the true value of the treasure and the Pearl is beyond measure. Saint Paul also quoted the prophet Isaiah, “What no eye has seen, nor ear heard, nor the heart of man conceived, what God has prepared for those who love him” (1Cor 2:9; cf. Is 64:3). It worth sacrificing for but it must be total, cf. Matt 19:21; Lk 14:26.
We all have two options, sacrifice everything and inherit eternal possession beyond measure or hold fast to any transient possession and forfeit eternal possession beyond measure. Saint Alphonsus Liguori we celebrate today toed the same part.
Bible Reading: 1Cor 2:6-16; Phil 3:4-11.
Thought for today: There are much more in heaven.
Let us pray: Lord, give us the guts to forfeit everything, even our lives for your sake – Amen.
Saint Alphonsus Liguori – Pray for us.
You are free to share this reflection with others if you consider it worthy.