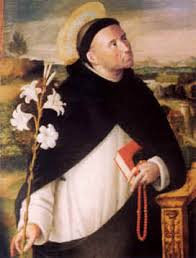 Saint Dominic (1170 – 6th August, 1221) was son of Felix Guzman and Blessed Joan of Aza. He was born in Caleruega, Spain. Dominic sold everything he had to feed the poor dying of famine in 1191 and also tried twice to sell himself into slavery to free the captives. Dominic joined Benedictine order in 1194 and became the superior in 1201. Pope Innocent III charged Dominic and Diego de Acebo with the task of converting the Albigensians in the southern France back to the Catholic faith. According to a legend, he received the Rosary during an apparition of the Virgin Mary in 1214. He became famous for his mercy and his work. Dominic refused at least three attempts to make him a bishop. In July 1215, he was granted permission to form a religious order dedicated to promoting morality and the expulsion of heresy. His order was confirmed on December 22, 1216, and in 1217, Pope Honorius III dubbed Dominic and his followers “The Order of Preachers.” Pope Honorarius III elevated Dominic to the rank of “Master of the Sacred Palace.” He also assigned Dominic with the task of restoring the discipline of religious orders for women in Rome. Pope Gregory IX canonized him on July 13, 1234 and is the patron of astronomers, the Dominican Republic, and the innocent who are falsely accused of crimes.[1]
Topic: When God appears silent.
In the district of Tyre and Sidon, a Canaanite woman kept shouting after Jesus, “Have mercy on me, Lord, Son of David; my daughter is tormented by a demon.” Jesus was silent. The disciples urged Him to send her away. Kneeling before Him, she prayed, “Lord, help me.” Jesus replied, “It is not fair to take the children’s food and throw it to the dogs.” And the woman answered, “Yes, Lord, yet even the dogs eat the crumbs that fall from their master’s table.”
Often there are complaints that God is silent. Sometimes, it even takes the nature of accusation. The Psalmist rightly replies, “He who planted the ear, does he not hear? He who formed the eye, does he not see?” (Ps 94:9).
The letter to the Hebrews reads, “...faith is the assurance of things hoped for, the conviction of things not seen” (Heb 11:1). Faith when tested produces endurance and also reveals its genuineness, cf. Jas 1:3; 1Pt 1:7. God said that after testing, “They will call on my name, and I will answer them. I will say, ‘They are my people’; and they will say, ‘The Lord is our God.’”cf. Zech 13:9.
Jesus’ silence tested the woman’s faith. Hence Jesus finally said to her, “Woman, great is your faith! Let it be done for you as you wish.” In the same vein, we must continue to call on God until He hears our cry. Our souls must wait in silence for God alone because our hope and salvation come from Him alone, cf. Ps 62:1, 5. God also said, “...my righteous one shall live by faith, and if he shrinks back, my soul has no pleasure in him” (Heb 10:38). May we imitate Saint Dominic who stood firm to the end.
Bible Reading: Jas 1:2-8.
Thought for today: ...endurance produces character (Rom 5:4).
Let us pray: Lord, give us the grace to endure to the end – Amen.
Saint Dominic – Pray for us.
You are free to share this reflection with others if you consider it worthy.