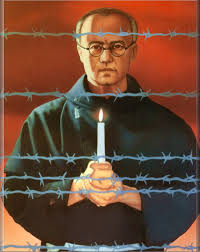 Saint Maximilian Mary Kolbe was born on 8th January, 1894 in Poland as Raymund Kolbe. He was a Conventual Franciscan friar and very active in promoting the Immaculate Virgin Mary. Maximilian earned doctorate in philosophy and theology at the age of 21 and 28 respectively. He organized the Army of the Immaculate One (Militia Immaculata) aimed at the conversion of sinners through the intercession of Mary. Maximilian was ordained a catholic priest in 1918 and continued his work of promoting Mary throughout Poland. Over the next several years, Kolbe founded a monthly periodical titled Knight of the Immaculate and also operated a religious publishing press. He also founded monasteries in both Japan and India. In 1936, his poor health forced him to return to Poland. He was among the brothers who remained in the monastery at the break of World War II. He opened a temporary hospital to aid those in need. He was sent to prison but released three months later. Kolbe refused to sign a document that would recognize him as a German citizen with his German ancestry and continued to work in his monastery, providing shelter for refugees – including hiding 2,000 Jews from German persecution. On 17th February, 1941, the monastery was shut down; Kolbe was arrested by the German Gestapo and taken to the Pawiak prison and three months after was transferred to Auschwitz. Toward the end of his second month in Auschwitz, 10 men were chosen to face death by starvation to warn against escapes. Kolbe was not chosen but volunteered to take the place of a man with a family. After two weeks of dehydration and starvation, he was given a lethal injection of carbolic acid. He died on 14th August, 1941 and his remains were cremated on 15th August. Kolbe was beatified as a “Confessor of the Faith” on 17th October, 1971 by Pope Paul VI and canonized by Pope Saint John Paul II on 10th October, 1982 as a martyr of charity. He is the patron saint of drug addicts, prisoners, families, and the pro-life movement.[1]
Topic: True greatness.
The disciples asked Jesus in today’s gospel, “Who is the greatest in the kingdom of heaven?” Jesus put a child among them and told them that one must become like a child to enter the kingdom of heaven, and to be the greatest requires childlike humility. He also warns against despising children.
Jesus highlights among other things childlike humility. This goes with lots of blessings, cf. Prov 3:34; 1Pt 5:5; Jas 4:6. God decorates the humble with victory, leads them in what is right, and also teaches them His way, cf. Ps 25:9; 149:4b. Their deliverance is assured, cf. 2Sam 22:28; Ps 18:27.
Jesus warns, “whoever exalts himself will be humbled, and whoever humbles himself will be exalted” (Matt 23:12; cf. Lk 14:11. 18:14). And the Psalmist writes, “Unless the LORD builds the house, those who build it labour in vain. Unless the LORD watches over the city, the watchman stays awake in vain” (Ps 127:1). Let us therefore follow the example of Saint Maximilian Kolbe and humble ourselves under the mighty hand of God, that in due time He may exalt us, cf. 1Pt 5:6. True greatness comes from God to those who are truly humble.
Bible Reading: 1Pt 5:6-11; 1Cor 1:18-31.
Thought for today: Pride brings disgrace, but humility wisdom, cf. Prov 11:2.
Let us pray: Lord, give us the grace of humility – Amen.
Saint Maximilian Mary Kolbe – Pray for us.
You are free to share this reflection with others if you consider it worthy.