Homily (Reflection) for the Memorial of Saint John Mary Vianney, P. (04th August, 2018) on the Gospel and the Memorial 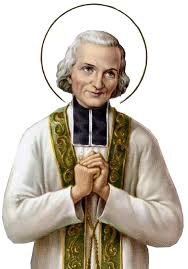 Jean-Baptiste-Marie Vianney, John Mary Vianney (May 8, 1786 – August 4, 1859) was born in Dardilly, France. He was raised in a Catholic home and the family often helped the poor and housed St. Benedict Joseph Labre when he made his pilgrimage to Rome. It was very difficult for him to comprehend Latin lectures. He was eventually ordained a deacon in June 1815 and a priest on August 12, 1815. Fr. Vianney was appointed parish priest of the Ars parish in 1818. He spent 11 to 12 hours at confession during winter and about 16 hours during summer. He refused to retire. By 1853, Fr. Vianney had attempted to run away from Ars four times to become a monk. He was the champion of the poor. On October 3, 1873, Pope Pius IX proclaimed him “Venerable” and on January 8, 1905, Pope Pius X beatified him. St. John Vianney was canonized on May 31, 1925.[1]
Topic: When ego becomes centric.
When Herod heard about Jesus, he said that John the Baptist had been raised from the dead. He bound and imprisoned him because John condemned his adulterous union with his brother Philip’s wife. Herod would have killed him but he feared the crowd who regarded him as a prophet. However, the daughter of Herodias’ dance on his birthday made him to promise on oath to grant whatever she might ask. Following her mother’s prompting she asked, “Give me the head of John the Baptist here on a platter.” Although Herod was grieved yet he instructed that John’s head be given to the girl because of his oath and his guests. The girl took it to her mother.
When Herod could think about someone else, he feared the crowds. He could command that John’s head be given to the girl because he was thinking about himself alone. Otherwise, what else could have removed the fear of the crowd in him? His thought of his oath and what his guests would think of him carried the day. The anger in Herodias set fire that could not be quenched by Herod’s feeling of extreme sadness.
Often we see both Herod and Herodias at play in us. Let no one allow anger to lead him/her into sin, cf. Eph 4:26. And “Let every man be quick to hear, slow to speak, slow to anger” (Jas 1:19). We are nothing without God, cf. 2Cor 3:5. We ought to follow the example of Saint John Mary Vianney and glorify God in everything we do, cf. 1Cor 6:20.
Bible Reading: 2Cor 4:1-10.
Thought for today: Worship God alone.
Let us pray: May God help us to do His will always – Amen.
Saint John Mary Vianney – Pray for us.
You are free to share this reflection with others if you consider it worthy.