There was a presbytery in which a priest was living with two houseboys. The priest used to invite them by pressing the bell, once for the elder and twice for the younger one. However, when the elder noticed that the priest would press the bell again if he delayed, he used that as a means of avoiding his summons.
Topic: Answering God’s call. 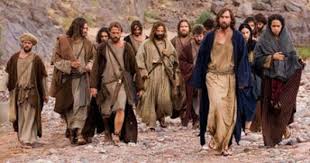 The call to discipleship demands unreserved positive response. Accordingly Jesus warns, “If any man would come after me, let him deny himself and take up his cross and follow me” (Mk 8:34; cf. Lk 14:27). Again, “If any one comes to me and does not hate his own father and mother and wife and children and brothers and sisters, yes, and even his own life, he cannot be my disciple” (Lk 14:26; cf. Lk 14:33; Matt 10:37-38). And again, “No one who puts his hand to the plow and looks back is fit for the kingdom of God” (Lk 9:62).
In the gospel, when Peter and his brother Andrew were called they left their nets and followed Jesus immediately, cf. Mk 1:18. Likewise James and his brother John left even their father Zebedee with the hired men and followed Jesus, cf. Mk 1:20. The lives of our fathers in faith were not different. When Abraham, Moses, Samuel among others were called, they all answered: “Here am I” cf. Gen 22:1; Ex 3:4; 1Sam 3:4, 5, 6, 8.
Call to discipleship is a call to be sons and daughters of God, cf. Matt 12:49-50; Mk 3:34-35; Lk 8:21. And this manifests God’s love for us, cf. 1Jn 3:1. First letter of Saint Peter reads: “But you are a chosen race, a royal priesthood, a holy nation, God's own people, that you may declare the wonderful deeds of him who called you out of darkness into his marvellous light” (1Pt 2:9). But those called must be careful lest they miss the blessing, cf. 1Pt 3:9.
Again, call to discipleship is not a call to a life free from all forms of suffering but a life with an assurance that after the suffering we might go through in this world, the God who has called us to his eternal glory in Christ, will himself restore, establish, and strengthen us, cf. 1Pt 5:10. Hence, Paul concluded, “I consider that the sufferings of this present time are not worth comparing with the glory that is to be revealed to us” (Rom 8:18). Sometimes some abandon God forgetting all He has done and is doing for us and “...that in everything God works for good with those who love him, who are called according to his purpose” (Rom 8:28). God queries,
Why was no one there when I came? Why did no one answer when I called? Is my hand shortened, that it cannot redeem? Or have I no power to deliver? By my rebuke I dry up the sea, I make rivers a desert; their fish stink for lack of water, and die of thirst (Is 50:2).
Not listening to God implies closing His ears to our cries, prayers, praises, and so on, cf. Prov 12:22; 15:8, 26; 21:27. Through the prophet Zechariah God said, “As I called, and they would not hear, so they called, and I would not hear” (Zech 7:13). And in the Second Chronicles we read, “if my people who are called by my name humble themselves, and pray and seek my face, and turn from their wicked ways, then I will hear from heaven, and will forgive their sin and heal their land” (2Chr 7:14).
My dear brothers and sisters, we are all called just as the apostles were called. The big question is whether we are ready to follow God leaving everything behind without even saying goodbye? Saint Paul begs us “...to lead a life worthy of the calling to which you have been called” (Eph 4:1). In the same vein, Saint Peter also admonishes us thus: “... as he who called you is holy, be holy yourselves in all your conduct” (1Pt 1:15; 1Thess 4:7). So it is left for us to either follow God or the desires of our hearts (our enemy).
Bible Reading: Is 43:1-7; 1Pt 2:1-10; 3:8-12; 1Jn 3:1-10; Lk 9:57-62; Eph 4:1-24.
Silent Prayer: Do you know that you are called to be Christ’s disciple? Is there anything you love more than God who has called you?
Let us Pray: Lord, give us all the graces we need so that we may follow you without looking at or thinking of any other thing else – Amen.
You are free to share this reflection with others if you consider it worthy.