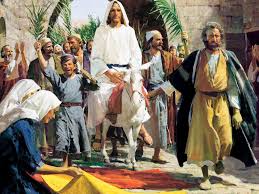 Today has different names because of different reasons. It is called the 6th or the Last Sunday of Lent because it comes after the 5th Sunday of Lent and also the Last Sunday before Easter. Today is also called Palm Sunday because today Christians go to church with either palms or branches from other trees according to different regions of the world to commemorate Jesus’ entry into Jerusalem as a King amidst the crowd who spread their clothes and tree branches on the road shouting “Blessed is the king who comes in the name of the Lord! Peace in heaven, and glory in the highest heaven!” cf. Lk 19:38. It is also called the Passion Sunday because the story of Christ’s suffering and death is read today.


This Sunday opens the Holy Week; the week we celebrate the mysteries of our salvation accomplished by Christ in the last days of his earthly life, from his messianic entry into Jerusalem, until his blessed Passion and glorious Resurrection. Holy Week is dedicated to the celebration of penance. Lent continues until Maundy Thursday.


The Passion we read today reminds me of one woman from a wealthy family. She thought she fell in love with one man who did not have a serious means of livelihood and later got married to him. As a result, this woman although she had been duped in the past by various people introduced her husband to her line of business thinking that she had nothing to fear because the man would see it as his own business and would also do anything possible to see it stand.


All started well. The man was very happy that he could eat well anytime and anywhere. But one day, the woman came back from a business trip and the man was nowhere to be found despite the fact that he knew that she would return on that day. At first, although she was surprised at but not much disturbed by his not being around to welcome her but later became terribly worried when she discovered that her husband’s personal belongings were also not around. Her neighbours later told her that the man left more than a week ago after siphoning her bank account to an unknown destination.


Topic: Lay Not Your Palms.


All that happened to Jesus were all prophesied by the prophets before his coming, cf. Matt 26:24, Mk 9:12; 14:21, Lk 18:31; 22:22 among other passages. Those who interacted with Jesus while here on earth as a man can be divided into various groups which include – the crowd, his disciples, and the apostles (the most intimate group) and Judas was one of the apostles. While at the Passover meal with the twelve (the apostles) He said to them: “...see, the one who betrays me is with me, and his hand is on the table” (Lk 22:21). This statement threw all of them into distress with the exception of the architect of His betrayal, cf. Lk 22:23. This Passion narrative reveals among other things that Jesus’ pain was not just from the fact that He was dying but that He was dying through the instrumentality of an intimate friend, cf. Ps 55:13.


I was at Enugu–Nigeria repairing my car when some young men engaged themselves in a discussion about the passion of Jesus. They wondered why Judas allowed himself to be used. Each and every one of them was of the opinion that he would not allow himself to be used. That discussion caught my attention. And I asked myself among other questions: ‘Is Jesus still in agony because of the betrayal of Judas?’ Reflect on these.


We remember that all that happened to Jesus was foretold before His coming. But all these He went through was for a purpose. According to Saint Peter in his first Letter the essence of Christ’s death is that He might bring us to God, cf. 1Pt 3:18. The author of the Letter to the Hebrews put it thus: “But we see Jesus, who for a little while was made lower than the angels, crowned with glory and honour because of the suffering of death, so that by the grace of God he might taste death for everyone” (Heb 2:9). Jesus came and abolished death and brought life and immortality to light through the gospel, cf. 2Tim 1:10.


Just as Jesus chose Judas as His close friend, He has also made me and you His close friends by making known to us all that He heard from the Father, cf. Jn 15:15. He demonstrated this by dying for us. Hence we read in the gospel, “Greater love has no man than this, that a man lay down his life for his friends” (Jn 15:13). The question is, ‘despite the fact that Jesus suffered terribly and died most ignobly to make us friends of God, are we really friends of God?’ Remember the words of Jesus: “You are my friends if you do what I command you” (Jn 15:14). And it is only by being faithful in trials unto death that one will earn the crown of life God has prepared for us, cf. Rev 2:10.


Imagine the pains and the trauma the lady we saw in our introductory story went through not just because her money was taken away but through whom. Being Jesus’ friends consoles him for Judas’ betrayal. Failing to be His friend makes nonsense of everything he went through. Sin brought death which Jesus came and saved us from, cf. Jas 1:15. The palms (branches) we carry symbolise our lives, our desires, and so on. Laying them down therefore is a symbolical laying down of our lives, our desires and so on for Christ. Do not see these palms just like the crowd who spread their clothes and tree branches on the road shouting because they were the people who also shouted even louder, “Crucify him, Crucify him” Mk 15:13, 14. Paul rightly wrote “many … live as enemies of the cross of Christ” (Phil 3:18).


Thought for today: Who are you to Christ?


Let us pray: Jesus, my Redeemer, give me the grace to live my life always as one you have saved from death. May I never betray you again for whatever reason – Amen.

Have been looking for 17th and 18th readings of Thurs and Friday of the lent,need to catch up.God bless you.I had checked the pulpitonline.