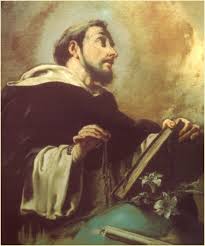 Saint Dominic (1170 – 6th August, 1221) was son of Felix Guzman and Blessed Joan of Aza. He was born in Caleruega, Spain. Dominic sold everything he had to feed the poor dying of famine in 1191 and also tried twice to sell himself into slavery to free the captives. Dominic joined Benedictine order in 1194 and became the superior in 1201. Pope Innocent III charged Dominic and Diego de Acebo with the task of converting the Albigensians in the southern France back to the Catholic faith. According to a legend, he received the Rosary during an apparition of the Virgin Mary in 1214. He became famous for his mercy and his work. Dominic refused at least three attempts to make him a bishop. In July 1215, he was granted permission to form a religious order dedicated to promoting morality and the expulsion of heresy. His order was confirmed on December 22, 1216, and in 1217, Pope Honorius III dubbed Dominic and his followers “The Order of Preachers.” Pope Honorarius III elevated Dominic to the rank of “Master of the Sacred Palace.” He also assigned Dominic with the task of restoring the discipline of religious orders for women in Rome. Pope Gregory IX canonized him on July 13, 1234 and is the patron of astronomers, the Dominican Republic, and the innocent who are falsely accused of crimes.[1]
Topic: The road to success.
Peter declared about Jesus in today’s gospel, “You are the Messiah, the Son of the living God.” Jesus said to Peter in part, “Blessed are you, Simon son of Jonah! For flesh and blood has not revealed this to you, but my Father in heaven.”
Probably, the apostles would be expecting the sharing of positions when He began to tell them what awaited Him; “great suffering at the hands of the elders and chief priests and scribes, and be killed, and on the third day be raised.” Hence, Peter took Him aside and rebuked Him, “God forbid it, Lord! This must never happen to you.” Surprisingly Jesus replied to Peter, “Get behind me, Satan! You are a stumbling block to me; for you are setting your mind not on divine things but on human things.”
The road that leads to success is hard and its gate narrow and those who find it are few, cf. Matt 7:14. Saint Paul writes about Jesus,
...though he was in the form of God, did not regard equality with God as something to be exploited, but emptied himself, taking the form of slave ... he humbled himself and became obedient to the point of death.... Therefore God also highly exalted him and gave him the name that is above every name (Phil 2:6-9).
The road to success is not an easy one. Whoever wants success must certainly work towards that, cf. Rom 8:17.
Bible Reading: Matt 7:13-14; Phil 2:1-11.
Thought for today: Walk towards success.
Let us pray: Lord, give us the fortitude to overcome all the trials on the road to success – Amen.
Saint Dominic – Pray for us.
You are free to share this reflection with others if you consider it worthy.