Homily (Reflection) for the Memorial of Saint Pius X, PP., (21st August, 2019) on the Gospel and the Memorial 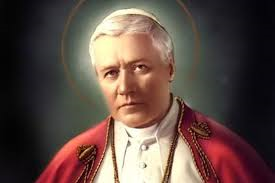 Pope Saint Pius X (02nd June, 1835 – 20th August, 1914) was born Giuseppe Melchiorre Sarto at Riese and became Pope in August 1903. His most important reform was to order the codification of the first Code of Canon Law. He was particularly devoted to the Blessed Virgin Mary. Pius X was the only pope in the 20th century with extensive pastoral experience and implementation at the parish level, which led him to favour the use of the vernacular language in teaching catechesis, while the encouragement for frequent reception of Holy Communion became a lasting innovation of his papacy. He vehemently opposed modernism, which claimed that Roman Catholic dogma should be modernized and blended with nineteenth-century philosophies. Pius X viewed modernism as an import of secular errors affecting three areas of Roman Catholic belief namely, theology, philosophy, and dogma. He combined within himself a strong sense of compassion, benevolence and poverty, but also stubbornness and a certain stiffness. He was the only pope in the 20th century who gave Sunday homilies in the pulpit every week. He was canonized on 29 May 1954.[1]
Topic: Duty bound.
In today’s gospel, Jesus compared the kingdom of heaven to “a landowner who went out early in the morning to hire labourers for his vineyard. After agreeing with the labourers for the usual daily wage, he sent them into his vineyard.” He also sent into his vineyard those he saw standing in the marketplace at about nine o’clock, noon, three o’clock, and even at about five o’clock. In the evening, the owner of the vineyard asked his manager to pay the labourers beginning from the last. When those who were hired first saw that all including those who worked for just an hour were paid the usual daily wage, they grumbled against the landowner.
The expectation of those who came first looks plausible. However, they forgot that besides being bound to pay those who worked for him (cf. Lev 19:13), the landowner is also bound to be generous to everybody (cf. Is 58:7, 10; Ezek 18:7, 16; Matt 25:35, 42.
This is how God deals with all creatures, cf. Matt 5:45. He “does not deal with us according to our sins, nor requite us according to our iniquities” (Ps 103:10). He expects us to deal with our brothers and sisters in the same way, cf. Matt 18:33; 1Jn 4:11. So as you pay those who worked for you, do not forget others who need your help. We are bound to pay those who worked for us and to be charitable to everybody as well.
Bible Reading: Ps 103:1-22.
Thought for today: It is not by your merit.
Let us pray: Lord, thank you for your overflowing kindness in and around us – Amen.
Saint Pius X – Pray for us.
You are free to share this reflection with others if you consider it worthy.