Homily (Reflection) for the Memorial of Saint Maximilian Mary Kolbe, P.M., (14th August, 2019) on the Gospel and the Memorial 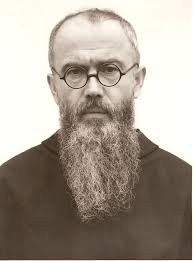 Saint Maximilian Mary Kolbe was born on 8th January, 1894 in Poland as Raymund Kolbe. He was a Conventual Franciscan friar and very active in promoting the Immaculate Virgin Mary. Maximilian earned doctorate in philosophy and theology at the age of 21 and 28 respectively. He organized the Army of the Immaculate One (Militia Immaculata) aimed at the conversion of sinners through the intercession of Mary. Maximilian was ordained a catholic priest in 1918 and continued his work of promoting Mary throughout Poland. Over the next several years, Kolbe founded a monthly periodical titled Knight of the Immaculate and also operated a religious publishing press. He also founded monasteries in both Japan and India. In 1936, his poor health forced him to return to Poland. He was among the brothers who remained in the monastery at the break of World War II. He opened a temporary hospital to aid those in need. He was sent to prison but released three months later. Kolbe refused to sign a document that would recognize him as a German citizen with his German ancestry and continued to work in his monastery, providing shelter for refugees – including hiding 2,000 Jews from German persecution. On 17th February, 1941, the monastery was shut down; Kolbe was arrested by the German Gestapo and taken to the Pawiak prison and three months after was transferred to Auschwitz. Toward the end of his second month in Auschwitz, 10 men were chosen to face death by starvation to warn against escapes. Kolbe was not chosen but volunteered to take the place of a man with a family. After two weeks of dehydration and starvation, he was given a lethal injection of carbolic acid. He died on 14th August, 1941 and his remains were cremated on 15th August. Kolbe was beatified as a “Confessor of the Faith” on 17th October, 1971 by Pope Paul VI and canonized by Pope Saint John Paul II on 10th October, 1982 as a martyr of charity. He is the patron saint of drug addicts, prisoners, families, and the pro-life movement.[1]
Topic: Gentiles and tax collectors.
Jesus while teaching in today’s gospel gave steps towards reconciling with the offenders. They include going to the offender alone, going with one or two others, and presenting the matter to the church. He concludes, “… if the offender refuses to listen even to the church, let such a one be to you as a Gentile and a tax collector” (Matt 18:17).
The Jews classified the Gentiles and tax collectors among the worst sinners. Devout Jews are not expected to have anything to do with them not even making effort to convert them. In the early Church, some of the apostles and other Christians maintained this tradition. Hence they criticized Peter, cf. Acts 11:2.
However Jesus’ attitude towards them did not follow this tradition. In fact, it was among the barriers that prevented them from believing Him to be the son of God, cf. Mk 2:16; Lk 7:39. And His reply to those complaining against Him dinning and winning with the tax collectors and other sinners is, “… Those who are well have no need of a physician, but those who are sick. Go and learn what this means, ‘I desire mercy, not sacrifice.’ For I have come to call not the righteous but sinners” (Matt 9:12-13; cf. Lk 5:32; Hos 6:6). He was even nicknamed “… a friend of tax collectors and sinners!” (Matt 11:19).
Jesus instructs His followers to love their enemies and pray for those who persecute them, cf. Matt 5:44. We know that love bears all things and never ends, cf. 1Cor 13: 7-8). Saint Paul admonishes us, “Bless those who persecute you; bless and do not curse them” (Rom 12:14).
The summary of all the commandments given to Christians is to love everybody, cf. Matt 5:43-48; Jn 13:35; 1Jn 4:21. Saint Paul rightly noted that without love every gift and good deeds come to naught, cf. 1Cor 13:2-3. Our love ought not to be “… in word or speech but in deed and in truth” (1Jn 3:18). Whoever hates is the real Gentile and tax collector. Saint Paul cautioned Saint Peter publicly “… If you, though a Jew, live like a Gentile and not like a Jew, how can you compel the Gentiles to live like Jews?” (Gal 2:14). After the three steps given by Jesus in today’s gospel comes the most important one, LOVE. We ought to love everybody no matter how difficult it is for we all have the same God, and are all members of the same body, the Church, cf. Rom 3:29; Eph 3:6. Saint Maximilian Mary Kolbe lived it out. Let us follow his example.
Bible Reading: Matt 5:43-48; Lk 3:7-14; 5:27-32; 1Cor 13:1-13; Eph 2:11-3:21.
Thought for today: How do you treat your Gentiles and tax collectors?
Let us pray: Merciful God, give us a heart of flesh that we may love everybody even as you love us – Amen.
Saint Maximilian Mary Kolbe – Pray for us.
You are free to share this reflection with others if you consider it worthy.