Homily (Reflection) for the Memorial of Saint Bernard, Abb. D., (20th August, 2019) on the Gospel and the Memorial 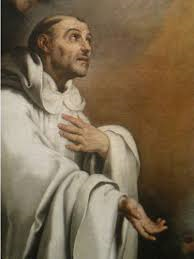 Saint Bernard of Clairvaux (1090 – 20th August, 1153) was born of noble parentage in Burgundy, France. His pious parents sent him at an early age to a college at Chatillon. Fearing the snares and temptations of the world, he embraced the Cistercian Order. He was sent by his superior with twelve other monks to found a new monastery at Clairvaux. Saint Bernard was appointed Abbot. He founded numerous monasteries, composed a number of works and undertook many journeys for the honour of God. He refused several Bishoprics offered to him. Popes were governed by his advice. He was commissioned by Pope Eugene III to preach the second Crusade. In obedience to the Sovereign Pontiff he travelled through France and Germany, and aroused the greatest enthusiasm for the holy war among the masses of the population. The failure of the expedition raised a great storm against the saint, but he attributed it to the sins of the Crusaders. St. Bernard was eminently endowed with the gift of miracles.[1]
Topic: Hazards of wealth.
It baffled the disciples to hear that it will be hard for the rich to enter the kingdom of heaven. Jesus reassured them that nothing is impossible for God, cf. Lk 1:37. In reply to Peter’s question about what they would gain Jesus said,
Truly I tell you, at the renewal of all things, when the Son of Man is seated on the throne of his glory, you who have followed me will also sit on twelve thrones, judging the twelve tribes of Israel. And everyone who has left houses or brothers or sisters or father or mother or children or fields, for my name’s sake, will receive a hundredfold, and will inherit eternal life.
Jesus’ words sounded as if it is sinful to be wealthy. However, He had admonished us, “...store up for yourselves treasures in heaven, where neither moth nor rust consumes and where thieves do not break in and steal” (Matt 6:20). Saint James also wrote, “Your gold and silver have rusted, and their rust will be evidence against you and will eat your flesh like fire. You have laid up treasure for the last days” (Jas 5:3).
Wealth as we can see is not a problem but one’s understanding of it. Riches comes from God, cf. Prov 10:22. Hence Saint Paul wrote, “What have you that you did not receive? If then you received it, why do you boast as if it were not a gift?” (1Cor 4:7bc). However, the richer one becomes, the more he/she is expected to give, Lk 12:48. Saint Bernard rightly admonished all, “Let us work for the food which does not perish – our salvation. Let us work in the vineyard of the Lord to earn our daily wage in the wisdom which says: Those who work in me will not sin.”
Bible Reading: Ps 112:1-10; Jas 5:1-6; Matt 6:19-21.
Thought for today: One’s attitude towards wealth.
Let us pray: Lord, heal us of insatiable desire for material wealth and help us to store up true wealth for the world to come – Amen.
Saint Bernard of Clairvaux – Pray for us.
You are free to share this reflection with others if you consider it worthy.