Homily (Reflection) for the Memorial of Saint Alphonsus Liguori, Bp. D. (01st August, 2019) on the Gospel and the Memorial 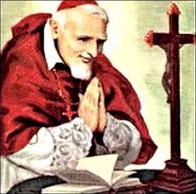 Saint Alphonsus Liguori (September 27, 1696 - August 1, 1787) was raised by a devout mother. He received his doctorate at the age of sixteen but later dropped secular life and was ordained on December 21, 1726. Saint Alphonsus founded the Congregation of the Most Holy Redeemer (Redemptorists) on November 9, 1732. He accepted the papal command to accept the see of St. Agatha of the Goths near Naples in 1762. For thirteen years he fed the poor, instructed families, reorganized the seminary and religious houses, taught theology, and wrote. His austerities were rigorous, and he suffered daily the pain from rheumatism. In 1780, he was tricked into signing a submission for royal approval of his congregation which altered the original rule. Alphonsus was beatified in 1816, canonized in 1839, and was declared a Doctor of the Church by Pope Pius IX in 1871. His writings on moral, theological, and ascetic matters especially his Moral Theology and his Glories of Mary had great impact and have survived through the years. He is the patron of confessors, moral theologians, and the lay apostolate.[1]
Topic: Separate from evil.
In today’s gospel, Jesus likens the kingdom of heaven to a net thrown into the sea which caught every kind of fish. When it was full, it was drawn ashore, and the good ones are put into baskets but the bad thrown out. Similarly, at the end of the age, the angels will separate the evil from the righteous and throw them into the furnace of fire, where there will be weeping and gnashing of teeth. Note that terrible furnace of fire appeared again today.
The church is of saints and sinners. However, all must strive to be what we are called to be, saints of God, cf. Rom 1:6, 7; 1Cor 1:2. God blessed every person with all each needs to be good according to each person’s ability, cf. Matt 25:15; Eph 1:3. So being good or bad is not a matter of ability but of choice, cf. Deut 30:19. All who proves to be good not minding individual abilities will receive the same verdict, “Well done, good and faithful servant; you have been faithful over a little, I will set you over much; enter into the joy of your master” (Matt 25:21, 23).
Unless one separates him/herself from evil, he/she will be separated from the righteous and be thrown into the terrible furnace of fire. Our prayer ought to be in line with the Psalmist, “One thing have I asked of the LORD, that will I seek after; that I may dwell in the house of the LORD all the days of my life, to behold the beauty of the LORD, and to inquire in his temple” (Ps 27:4).
Bible Reading: Matt 25:31-46.
Thought for today: Decide wisely today.
Let us pray: Lord, “Restore to me the joy of your salvation, and sustain in me a willing spirit” – Amen (Ps 51:12).
Saint Alphonsus Liguori – Pray for us.
You are free to share this reflection with others if you consider it worthy.