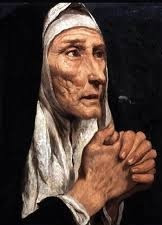 Saint Monica was born on 331 AD in Thagaste and was married to a pagan, Patricius at a very tender age. Her children were Saint Augustine (August 28), Navigius, and Perpetua. She endured her husband’s and her mother’s-in-law bad temper. Although Patricius criticized her for her charity and piety, but he always respected her. She later won him and her mother-in-law to Christianity. She stopped Augustine from eating and sleeping in her house when he accepted the Manichean heresy and was living immoral life. Monica readmitted him after a vision that assured her that Augustine would return to the faith. She stayed too close to Augustine with prayers and fasting than he wanted. Augustine tricked her and left for Rome. On her arrival, she learnt that he had left for Milan. She did not give-up. In Milan, Augustine came under the influence of the bishop, Saint Ambrose, who also became Monica’s spiritual director. Saint Ambrose baptized Augustine and several of his friends at Easter, 387. Soon after, they left for Africa. She became ill and suffered severely for nine days and died on 387 AD in Ostia Antica. She is the patron Saint of Alcoholics, Married women, and Mothers. Topic: Ever on guard. Jesus warns in today’s gospel that the Son of Man is coming at an unexpected hour, Keep awake ... for you do not know on what day your Lord is coming.... if the owner of the house had known in what part of the night the thief was coming, he would have stayed awake and would not have let his house be broken into. Blessed is the faithful and wise slave whom the master finds at work when he comes. His master will put him/her in charge of all his possessions. But the wicked slave who thinks the master is delayed and begins to beat others, and eats and drinks with drunkards will be caught unawares. He will cut such off and put him with the hypocrites, where there will be weeping and gnashing of teeth. Many do postpone when to give their lives entirely to God. Regrettably, those who are fortunate to see the proposed dates keep proposing new ones forgetting that no one is sure of seeing the next second, cf. Jas 4:14. The riches of God’s kindness and forbearance and patience is meant to lead us to repentance, cf. Rom 2:4; 2Pt 3:9. We ought to accept God’s olive branch now because no one knows when the time will be up. Again, as His kindness is great so also is His justice, cf. Rom 2:5-11. Bible Reading: Rom 2:1-16; Jas 4:13-17. Thought for today: Today is the right time. Let us pray: Lord, help us to turn fully to you without any further delay – Amen. Saint Monica – Pray for us. You are free to share this reflection with others if you consider it worthy. For more homilies (reflections): Visit our website: www.thepulpitonline.com; Like us on Facebook: www.facebook.com/thepulpitonline; Follow us on Twitter: www.twitter.com/thepulpitonline; Join our WhatsApp Group via: +234 810 298 6313; Send us Email: thepulpitonline@gmail.com. To Contact and/or to support this ministry: Tel: +234 813 305 0302; Email: thepulpitonline@gmail.com. May God bless you all+
Posted by thepulpitonline.com
Share to: