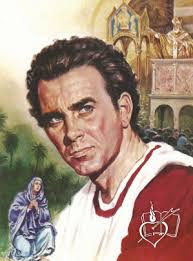 Saint Augustine of Hippo (13th November 354 – 28th August 430) was son of Saint Monica. Although he was brought up a Christian and also one of the most intelligent men who ever lived, he spent many years in wicked living and in false beliefs (Manichaeism and neo-Platonism). Through the prayers of his mother and the preaching of Saint Ambrose, he became convinced that Christianity was the one true religion. But he was not converted immediately because he thought he could never live a pure life. On hearing that two men were converted after reading the life of Saint Anthony, he was filled with bitter sorrow and cried to God, “How long more, O Lord? Why does not this hour put an end to my sins?” He was baptized in 386, became a priest, a bishop, a famous Catholic writer, Founder of religious priests. Augustine is recognized as a saint in the Catholic Church, the Eastern Christian Church, and the Anglican Communion and as a preeminent Doctor of the Church. He overcame strong heresies, was very devout, practiced great poverty, and was also charitable. Augustine preached very often and prayed with great fervour right up until his death. He is the patron of the Augustinians, brewers, printers, theologians, the alleviation of sore eyes, and a number of cities and dioceses. Among his most important works are The City of God and Confessions. Topic: Never forget the oil. Jesus compared the kingdom of heaven to ten bridesmaids who went to meet the bridegroom with their lamps. The five wise ones took their oil also. When the bridegroom delayed, they all became drowsy and slept. However, they were called at midnight to meet the bridegroom. The foolish ones begged the wise ones for oil when their lamps were going out. They were asked to go and get theirs. And while they were out, the bridegroom entered into the wedding banquet with those who were ready and the door shut. The foolish ones later came and pleaded unsuccessfully to be let in. Jesus said, “I am the light of the world; he who follows me will not walk in darkness, but will have the light of life” (Jn 8:12; cf. Jn 9:5.12:46). He is the true light that enlightens every man/woman, cf. Jn 1:9. God has called us out of darkness into His marvellous light, cf. 1Pt 2:9. Every Christian is a son/daughter of light and of the day, and not of the night or of darkness, cf. 1Thes 5:5. His disciples are “the light of the world” (Matt 5:14). Despite all these, Jesus warns “be careful lest the light in you be darkness” (Lk 11:35). Both the wise and the foolish have their lamps. They all became drowsy and slept. However, when they were called to meet the bridegroom, it became clear who is who. Truly, God “has qualified us to share in the inheritance of the saints in light”, cf. Col 1:12. But for one to be admitted, he/she must carry also the oil, one’s good deeds, cf. Eph 5:8-10. We are urged to become sons and daughters of light now by believing in Him, cf. Jn 12:35-36. Whoever fails is condemned like the foolish bridesmaids, cf. Mk 16:16; Jn 3:18-19. Lamp without oil is useless; it cannot give light, cf. Matt 5:15. No matter how terrible your past is, follow the example of Saint Augustine and come back to God. Bible Reading: Lk 11: 33-36; Eph 5:1-20; 1Pt 2:1-10. Thought for today: Do you have enough oil? Let us pray: God, give us the grace to carry both our lamps and the oil – Amen. Saint Augustine – Pray for us. You are free to share this reflection with others if you consider it worthy. For more homilies (reflections): Visit our website: www.thepulpitonline.com; Like us on Facebook: www.facebook.com/thepulpitonline; Follow us on Twitter: www.twitter.com/thepulpitonline; Join our WhatsApp Group via: +234 810 298 6313; Send us Email: thepulpitonline@gmail.com. To Contact and/or to support this ministry: Tel: +234 813 305 0302; Email: thepulpitonline@gmail.com. May God bless you all+
Posted by thepulpitonline.com
Share to: