Homily (Reflection) for the Memorial of Saint Alphonsus Liguori, Bp. D. (01st August, 2020) on the Gospel and the Memorial 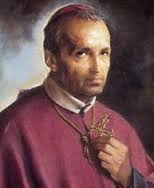 Saint Alphonsus Liguori (September 27, 1696 - August 1, 1787) was raised by a devout mother. He received his doctorate at the age of sixteen but later dropped secular life and was ordained on December 21, 1726. Saint Alphonsus founded the Congregation of the Most Holy Redeemer (Redemptorists) on November 9, 1732. He accepted the papal command to accept the see of St. Agatha of the Goths near Naples in 1762. For thirteen years he fed the poor, instructed families, reorganized the seminary and religious houses, taught theology, and wrote. His austerities were rigorous, and he suffered daily the pain from rheumatism. In 1780, he was tricked into signing a submission for royal approval of his congregation which altered the original rule. Alphonsus was beatified in 1816, canonized in 1839, and was declared a Doctor of the Church by Pope Pius IX in 1871. His writings on moral, theological, and ascetic matters especially his Moral Theology and his Glories of Mary had great impact and have survived through the years. He is the patron of confessors, moral theologians, and the lay apostolate.[1]
Topic: When ego becomes centric.
When Herod heard about Jesus, he said that John the Baptist had been raised from the dead. He bound and imprisoned him because John condemned his adulterous union with his brother Philip’s wife. Herod would have killed him but he feared the crowd who regarded him as a prophet. However, the daughter of Herodias’ dance on his birthday made him to promise on oath to grant whatever she might ask. Following her mother’s prompting she asked, “Give me the head of John the Baptist here on a platter.” Although Herod was grieved yet he instructed that John’s head be given to the girl because of his oath and his guests. The girl took it to her mother.
When Herod could think about someone else, he feared the crowds. He could command that John’s head be given to the girl because he was thinking about himself alone. Otherwise, what else could have removed the fear of the crowd in him? His thought of his oath and what his guests would think of him carried the day. The anger in Herodias set fire that could not be quenched by Herod’s feeling of extreme sadness.
Often we see both Herod and Herodias at play in us. Let no one allow anger to lead him/her into sin, cf. Eph 4:26. And “Let every man be quick to hear, slow to speak, slow to anger” (Jas 1:19). We are nothing without God, cf. 2Cor 3:5. We ought to follow the example of Saint Alphonsus Liguori who never forgot others and worked tirelessly for them.
Bible Reading: 2Cor 4:1-10.
Thought for today: Worship God alone.
Let us pray: May God help us to do His will always – Amen.
Saint Alphonsus Liguori – Pray for us.
You are free to share this reflection with others if you consider it worthy.