You are holding lots of keys: Memorial of Saint John Bosco, P.


Homily (Reflection) for the Memorial of Saint John Bosco, P., (31st January, 2020) on the Gospel and the Memorial
(Friday of the Third Week in Ordinary Time (II)) 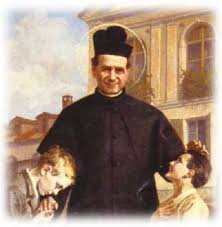 Saint John Bosco, also known as Giovanni Melchiorre Bosco and Don Bosco (16th August, 1815 – 31st January, 1888) was born in Becchi, Italy. He lost his father at the age of two, leaving him and his two elder brothers to be raised by his mother, Margherita. John was very devout. He later discerned the call to become a priest which requires education, something he lacked because of poverty. He was only 12 when he left home and laboured for two years in a vineyard before he met Jospeh Cafasso, a priest who helped him. He entered the seminary in 1835 and was ordained a priest in 1841. The large number of boys, between the ages of 12 and 18 he saw in deplorable conditions in the prison moved him to do more to help other boys from ending up there. He went into the streets and started to meet young men and boys where they worked and played. He used his talents as a performer, doing tricks to capture attention, then sharing with the children his message for the day. Fr Bosco worked tirelessly seeking work for boys who needed it, and lodgings for others. He fought for the rights for boys who were employed as apprentices and also encouraged those he thought would make good priests to consider a vocation to the priesthood. He established the Society of St. Francis de Sales in 1859 to carry on his charitable work, helping boys with their faith formation and to stay out of trouble. The call for his canonization came immediately after his death. Pope Pius XI declared him a blessed on 2nd June, 1929 and also canonized him on 1st April, 1934 (Easter Sunday). He was given the title, “Father and Teacher of Youth.” Saint John Bosco is the patron saint of apprentices, editors and publishers, schoolchildren, magicians, and juvenile delinquents.[1]
Topic: You are holding lots of keys.
Often we complain that things are not going the way they should. Many never thought of what they can do to get them go the right way. Even when one’s attention ever goes to that direction either on its own or through another person it is easily dropped thinking that such do not and might never count.
Today’s gospel has two parables. In the parable of the growing seed, Jesus compares the kingdom of God with the man who scattered the seed on the ground and without knowing how the seed would sprout and grow. The earth plays its part of making the seed produce grains the man will harvest. And in the second parable, He compares the kingdom of God with a mustard seed which is the smallest of all the seeds on earth but when sown it turns into the greatest of all shrubs. It ends up growing branches the birds can make nests in its shade.
It is unfortunate that many prefer to be defeatists contrary to the fact that we are made to be more than conquerors through him who loved us, cf. Rom 8:37. The seed would not have produced grains if the man did not scatter. In the same vein, the mustard seed would have remained the smallest of all the seeds on earth if not sown. The scattering of the seed and the sowing of the mustard seed were actually the keys that opened doors to greater things.
Dear child of God, as we are blessed with yet a new day, think of the seeds God has given to you. Do not neglect any. Put out your hand and sow/scatter them. That will certainly start a serious chain reaction. I therefore remind you and myself, we are holding lots of keys to unlock so many doors for the good of all. Saint John Bosco we celebrate today realised this fact and used the keys very well.
Bible Reading: 1Cor 12:4-30.
Thought for today: God has given you enormous power for good.
Let us pray: Lord, help us bring the needed change in the world by doing our part – Amen.
Saint John Bosco – Pray for us.
You are free to share this reflection with others if you consider it worthy.