Homily (Reflection) for the Memorial of Saint Anthony, Abb. (17th January, 2020) on the Gospel and the Memorial
(Friday of the First Week in Ordinary Time (II)) 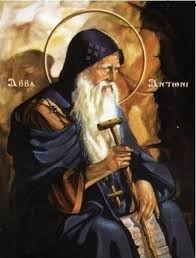 Saint Anthony was born about the year 260AD in Egypt. When his parents died, he gave his inheritance to the poor, and went into the desert, where he lived a life of penance. Many came to follow him, and he is known as the father of monks. He supported those who suffered for the faith under the persecutions of Diocletian, and helped Saint Athanasius in his fight against the Arians. He died in 356.[1]
Topic: Catch Jesus’ attention.
On Jesus return to Capernaum in today’s gospel, so many gathered that there was no longer room for them, even in front of the door; and Jesus was speaking the word to them. It was at that point that some men brought a paralysed man to Jesus. And since they could not gain access through the door because of the crowd, they removed the roof, dug through it, and lowered the paralytic on the mat he laid.
Seeing their faith, Jesus said to the paralytic: “Son, your sins are forgiven” which caused questioning among the scribes. He later said to the man, “I say to you, stand up, take your mat and go to your home”. The gospel reads further “And he stood up, and immediately took the mat and went out before all of them; so that they were all amazed and glorified God, saying, ‘We have never seen anything like this!’” (Mk 2:11, 12).
Imagine what would have happened if the men who brought the paralysed man stopped on their way because of the crowd or any other reason. In the same vein, you may have done much yet without any positive result. Do not lose hope. Try the roof with faith. Even your enemies will be amazed and glorify God when you catch Jesus’ attention. Jesus is coming soon. Hold fast so that no one may seize your crown, cf. Rev 3:11.
Bible Reading: Ps 116.
Thought for today: You have no reason to lose faith.
Let us pray: Lord, help us keep our faith in the face of all challenges – Amen.
Saint Anthony – Pray for us.
You are free to share this reflection with others if you consider it worthy.