Homily (Reflection) for the Memorial of Saint Thomas Aquinas, P.D., (28th January, 2020) on the Gospel and the Memorial
(Tuesday of the Third Week in Ordinary Time (II)) 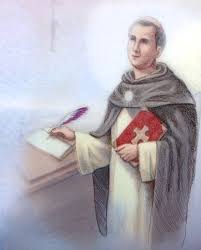 Tommaso d'Aquino (1225 – 7 March 1274) otherwise known as Saint Thomas Aquinas was an Italian Dominican friar and a Catholic priest who was an immensely influential philosopher, theologian and jurist in the tradition of scholasticism, within which he is also known as the “Doctor Angelicus” and “Doctor Communis”. Unlike many currents in the Church of the time, Thomas embraced several ideas put forward by Aristotle—whom he called “the Philosopher”—and attempted to synthesize Aristotelian philosophy with the principles of Christianity. Saint Thomas best known works are the Summa Theologica and the Summa contra Gentiles. His commentaries on Sacred Scripture and on Aristotle also form an important part of his body of work. He is also distinguished for his eucharistic hymns, which form part of the Church's liturgy. Saint Thomas Aquinas is a Doctor of the Church[1].


Topic: True Relations of Jesus.
When Jesus was told in today’s gospel that His mother and His brothers were standing outside asking for Him, He queried, “Who are my mother and my brothers?” After looking at those who sat around Him He concluded, “Here are my mother and my brothers! Whoever does the will of God is my brother and sister and mother.”
Many consider a number of things as advantages one can hope on in the journey towards God. However, Jesus defined in today’s gospel true relatives of His as those who do the will of God.
Saint Paul wrote to his son, “All scripture is inspired by God and is useful for teaching, for reproof, for correction, and for training in righteousness, so that everyone who belongs to God may be proficient, equipped for every good work” (2Tim 3:16-17).
Saint James exhorts all,
...be doers of the word, and not merely hearers who deceive themselves. For if any are hearers of the word and not doers, they are like those who look at themselves in a mirror; for they look at themselves and, on going away, immediately forget what they were like (Jas 1:22-24).
Those who do the word of God shall be blessed in their doing, cf. Jas 1:25. Whoever does right is righteous, cf. 1Jn 3:7. It is by doing right that one can put to silence the ignorance of the foolish, cf. 1Pt 2:15. Just like Saint Thomas Aquinas, we are brothers and sisters and mothers of Jesus only that we must do the will of God.
Bible Reading: Jas 1:19-27; 1Jn 2:29–3:10.
Thought for today: Are you truly Jesus’ brother and sister and mother?
Let us pray: Lord, give us the grace to become your Son’s brother and sister and mother – Amen.
Saint Thomas Aquinas – Pray for us.
You are free to share this reflection with others if you consider it worthy.