When they need forgiveness: Twenty-Fourth Sunday of the Year (C) (15th September, 2019).


Homily (Reflection) for the Twenty-Fourth Sunday of the Year (C) (15th September, 2019) on the Gospel


Topic: When they need forgiveness. 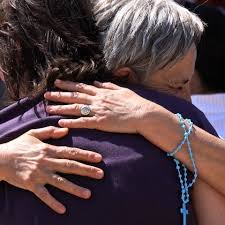 The Pharisees and the scribes called the tax collectors and sinners “the People of the Land” and prohibited associating with them. It is written in their regulations, ‘When a man is one of the People of the Land, entrust no money to him, take no testimony from him, trust him with no secret, do not appoint him guardian of an orphan, do not make him the custodian of charitable funds, do not accompany him on a journey’.[1] They “looked sadistically forward not to the saving but to the destruction of the sinner.”[2] Hence the rabbis’ teaching, “Let no one go with the wicked, not even to try to convince them to follow the law of God”.[3]
With these and many more, we can understand better why seeing all the tax collectors and sinners coming to listen to Jesus in today’s gospel, they grumbled and said, “This fellow welcomes sinners and eats with them”. However, Jesus replied them with these three parables that make up today’s gospel: the lost sheep (Lk 15:1-7), the lost coin (Lk 15:8-10), and the loving father (Lk 15:11-32). Note that the parable of the loving father is often referred to as The parable of the prodigal son.
He asked them if any of them who has a hundred sheep would not leave ninety-nine in the wilderness and search for one if lost. When he finds it, he would put it on his shoulders and rejoice. He would also invite his friends and neighbours to rejoice with him. Similarly, a woman who lost one out of ten silver coins she had would light a lamp and searched carefully for it. She would invite her friends and neighbours to rejoice with her if she finds it. Jesus concludes the first two parables telling them that there will be more joy in heaven over one sinner that repents than over ninety-nine who need no repentance.
The loving father had two sons. And the younger one demanded and took his own share of their father’s wealth to a distant land and squandered it after which things got really bad. When he returned to his father for forgiveness he was immediately reinstated to his princely position instead of being treated as a hired servant he prayed for. The loving father celebrated his return although his elder brother got so angry that he refused to enter the house. He felt their father was unfair.
Jesus did not emphasize forgiveness for any to go on and sin, cf. Rom 6:15. However, every sinner should not hesitate to come back to our loving Father, cf. 1Jn 2:1. We must remember always that Christ bore our sins in His body on the tree, that we might die to sin and live to righteousness. By his wounds you have been healed, cf. 1Pt 2:24.
In one of the episodes of the comic strip “Peanuts”, Lucy has a helium-filled balloon which she gives to Snoopy, saying, “I’m going in for lunch, Snoopy.... Hold this for me.”
She puts the string of the balloon in his mouth and warns him, “Whatever you do, don’t let of it!”
So Snoopy sits there motionless, holding the balloon. It must have been a long lunch, because eventually he falls asleep, still holding on to the balloon. During his nap he yawns and, of course, the balloon takes off.
In that twilight zone between sleeping and waking he realized what just happened and is suddenly wide awake in a panic. In the final frame he is walking along a railroad track in the moonlight, with his belongings in a sack tied to a pole on his shoulder, and saying to himself, “Make one mistake and you’re doomed for life!”[4]
In conclusion, it is important to remember always that we all need forgiveness. We can open the door of forgiveness for ourselves or close it against ourselves. Whenever we refuse to forgive any, we close the door of forgiveness against ourselves. To receive forgiveness, we must open the door by forgiving others their trespasses first (cf. Matt 6:12, 14-15; Lk 11:4). Remember the parable of the unforgiving servant, cf. Matt 18:21-35. Jesus cautions, “Judge not, and you will not be judged; condemn not, and you will not be condemned; forgive, and you will be forgiven” (Lk 6:37). We must eschew the attitude of the Pharisees and the scribes, the attitude of the elder son of the loving father, and the attitude of Lucy in our story from our lives and replace them with the love of the Father. God loves us so much that although He can make much more than the number of humans that exist yet He does not want any to perish, cf. Matt 3:9. 18:14; Lk 3:8. He wants us to “Go and do likewise” (Lk 10:37).
Bible Reading: Matt 6:5-15; Rom 6:15-23; 1Jn 2:1-6.
Thought for today: Everyone needs forgiveness.
Let us pray: Lord, give us forgiving hearts to forgive all who need forgiveness and also to encourage others to forgive – Amen.
You are free to share this reflection with others if you consider it worthy.