Homily (Reflection) for the Memorial of Saint Cornelius, Pp, and Saint Cyprian, B, Mm., (16th September, 2019) on the Gospel and the Memorial 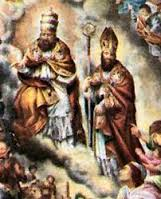 Pope Saint Cornelius (251-253) battled among other problems reconciling apostates and schism. Contrary to those who said that they should not be forgiven and those with the opinion that they should be forgiven but without heavy penance, Cornelius decreed that they must be welcomed back and insisted that they perform adequate penance. He was exiled to Civitavecchia where he died a martyr probably of hardships.
Saint Cyprian of Carthage was born to wealthy pagans around the year 190. He was converted at the age of 56, ordained a priest a year later, and made bishop two years after. Cyprian was a close friend of Pope Cornelius. He supported him both against the anti-pope Novatian and in his views concerning the re-admittance of apostates into the Church. He was martyred during the persecutions of Emperor Valerian on September 14, 258.[1]
Topic: As God’s blessings abound.
A centurion in Capernaum who loves the Jews and built a synagogue for them had a slave he valued highly, who was ill and close to death. He sent some Jewish elders to ask Jesus to come and heal his slave. Jesus was already near to his house, when he sent friends to say to Jesus, “Lord, do not trouble yourself, for I am not worthy to have you come under my roof; therefore I did not presume to come to you. But only speak the word and let my servant be healed....” Jesus was amazed and said to the crowd following Him, “I tell you, not even in Israel have I found such faith.” His slave was healed instantly.
The gospel describes this centurion as both wealthy and influential person. Yet he was an epitome of so many virtues. His love was boundless. And this was far from mere words: he erected a synagogue for the Jews and sought for the cure of a slave he could afford so many of them. He taught us that one’s value is far from his/her social status. His humility was heroic. He considered himself unworthy to meet Jesus. Hence, he sent the Jewish elders to meet Jesus and also prayed through friends that He should not enter under his roof. His faith even surprised Jesus.
All we have are gifts, cf. 1Cor 4:7. God’s blessings demand much humility lest they turn to their possessors’ perdition, cf. Jas 5:3-6. Nobody takes any out of this world, cf. Ps 49:16-17. They are to be extended to more and more people to increase thanksgiving, to the glory of God, cf. 2Cor 4:15. We are expected to emulate our Lord Jesus Christ, who became poor, so that we might become rich, cf. 2Cor 8:9. Saint Cornelius and Saint Cyprian toed this line.
Bible Readings: Phil 2:1-11.
Thought for today: ...all things were created through him and for him (Col 1:16).
Let us pray: God open my eyes to see the worth of every creature – Amen.
Saint Cornelius and Saint Cyprian – Pray for us.
You are free to share this reflection with others if you consider it worthy.