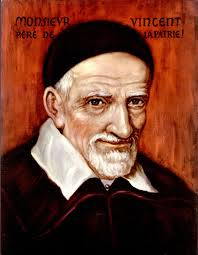 Saint Vincent de Paul was born to a poor peasant family in Pouy on 24th April, 1581. He was hired as a tutor based on his brilliant performance in his studies. His earnings helped him in the study of theology at the University of Toulose. He was ordained in 1600 and remained in Toulose for a time. In 1605, he was captured and sold into slavery. He escaped after two years and returned to France. While studying in Rome, he was a chaplain to the Count of Goigny and also in charge of distributing money to the deserving poor. He spent his life preaching missions to and providing relief to the poor and also established hospitals for them. Later, he extended his ministry to convicts. He founded the Ladies of Charity, and the Congregation of Priests of the Mission (Vincentians) to help him carry on the ministry. Saint Vincent helped in the reformation of the clergy and the seminary formation. He died in Paris on September 27, 1660. Pope Benedict XIII beatified him on August 13, 1729 and was canonized by Pope Leo XIII on June 16, 1737. He is the patron of charities; horses; hospitals; leprosy; lost articles; Madagascar; prisoners; Richmond, Virginia; spiritual help; Saint Vincent de Paul Societies; Sacred Heart Cathedral Preparatory; Vincentian Service Corps; volunteers.[1]
Topic: Knowing Jesus.
In today’s gospel Jesus asked His disciples while praying, “Who do the crowds say that I am?” They thought He was John the Baptist, Elijah, or one of the ancient prophets. He asked further, “But who do you say that I am?” Peter replied, “The Messiah of God.” He also foretold His death and resurrection.
The timing of these questions (when Jesus was praying), says a lot about their necessity. Jesus came that we may have life in abundance, cf. Jn 10:10. However, believing that Jesus is the Christ, the Son of God is the key, cf. Jn 20:31. The letter to the Hebrews reads, “...without faith it is impossible to please him. For whoever would draw near to God must believe that he exists and that he rewards those who seek him” (Heb 11:6).
Believing in God only needs our cooperation; “No one can come to me unless the Father who sent me draws him” (Jn 6:44). We ought to beseech God earnestly to draw us to Himself.
Bible Reading: Heb 11:4-7.
Thought for today: Who is Jesus?
Let us pray: God, draw us to yourself that we may believe in you – Amen.
Saint Vincent de Paul – Pray for us.
You are free to share this reflection with others if you consider it worthy.