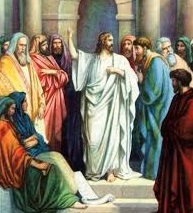 One day while I was travelling, some of those in the same vehicle were discussing about a funeral that took place not quite long ago. As they were discussing, one of them who probably never heard about the death of the person in question asked whether she was buried with her beauty.
Topic: What an existence?
Today’s gospel reads in part,
When some were speaking about the temple, how it was adorned with beautiful stones and gifts dedicated to God, he [Jesus] said, ‘As for these things that you see, the days will come when not one stone will be left upon another; all will be thrown down’.
There are a lot of things that people admire here on earth. They include persons, families, cities, states, countries, buildings, cars, and so on. Some people are ready to do anything either to acquire or to retain them. Regrettably, both those who possess these things and others in pursuit of them rarely think of God. For some who possess them, it is by their might. And for some who pursue them, they can make it on their own. God warns us: “Beware lest you say in your heart, 'my power and the might of my hand have gotten me this wealth’” (Deut 8:17).
The knowledge of the source of what one either has or searching for which one cherishes so much draws the person’s mind constantly to the source. The things of this world sometimes make people to go completely wild, thinking only about what they either possess or want to possess thereby either think little or nothing about others and about God. They often forget that there was a time we were not here on earth and that a time will also come when we will leave this world. It is of importance to note that the temple people were admiring in the gospel reading was completely destroyed in the 70 AD.
There is a story of a man who was very much blessed with earthly possessions but who could not give as little as a grain to anybody. When he died, his family members prepared for his burial. He was about to be buried, when one madman well-known in the community came in and acted as if sent to inspect the burial. He first went to where the man was lying in state and found out that the size of his casket was just like any of the caskets he had seen. He shook his head and asked them where they prepared for his burial which was shown to him and at the same time he found out that it was the normal size. The man could no longer bear all these. He began to query both the family members and his kinsmen why they were about making a very serious mistake. They were still looking at him when he went on to ask them whether they had forgotten how wealthy the man was. He asked them what will happen to all the things he left behind if they intend burying him with that size of the casket and in the small grave they dug. They told him that those things will not be buried with him but will be taken care of later after the burial to which he objected and insisted that they must be buried with him. For him the man needed a special casket and grave also that would be able to contain all he acquired.
When people asked Jesus about the signs, he warned us thus: “Beware that you are not led astray; for many will come in my name and say, ‘I am he!’ and ‘The time is near!’ Do not go after them”. All we admire in this world must one day either leave us or be left behind. The knowledge of this should not scare us as it scares many. Some have been lead astray by people who promised them the impossibles – no suffering, no death, no poverty, and so on and on.
It must have been after careful consideration of all these that the Psalmist said, “One thing have I asked of the LORD, that will I seek after; that I may dwell in the house of the LORD all the days of my life, to behold the beauty of the LORD …” (Ps 27:4). This is because unlike whatever we either possess here on earth or in pursuit of, whatever we possess in the house of the Lord will last forever.
We should not allow what we have or want to have here on earth to snare us away from God because “for the sun rises with its scorching heat and withers the grass; its flower falls, and its beauty perishes. So will the rich man fade away in the midst of his pursuits” (Jas 1:11). Remember that “… the wise, they die; fool and dolt perish together and leave their wealth to others” (Ps 49:10). It is by our endurance that we will save our souls.
Bible Reading: Eccl 2:1-11; 3:1-8; Heb 10:19-39; Eph 1:3-14; Ps 27; Ps 49.
Thought for today: Take time and examine your life and know what you live for.
Let us pray: Lord, may we know the shortness of our lives here on earth and use it to prepare for that which last forever – Amen.