Homily (Reflection) for the Memorial of Saint Cornelius, Pp, and Saint Cyprian, B, Mm., (16th September, 2021) on the Gospel and the Memorial 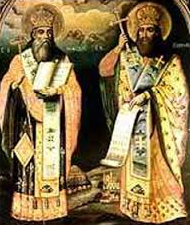 Pope Saint Cornelius (251-253) battled among other problems reconciling apostates and schism. Contrary to those who said that they should not be forgiven and those with the opinion that they should be forgiven but without heavy penance, Cornelius decreed that they must be welcomed back and insisted that they perform adequate penance. He was exiled to Civitavecchia where he died a martyr probably of hardships.

Saint Cyprian of Carthage was born to wealthy pagans around the year 190. He was converted at the age of 56, ordained a priest a year later, and made bishop two years after. Cyprian was a close friend of Pope Cornelius. He supported him both against the anti-pope Novatian and in his views concerning the re-admittance of apostates into the Church. He was martyred during the persecutions of Emperor Valerian on September 14, 258.[1]

Topic: Under many sins.

Jesus was a guest in the house of a Pharisee named Simon when a known sinner in the city came with an alabaster jar of ointment. She stood at Jesus’ feet and bathed them with her tears, dried them with her hair, kissed and anointed them with the ointment. The Pharisee was uncomfortable knowing too well the kind of person the woman was. Jesus told him a story of a creditor who had two debtors. One owed him five hundred denarii, and the other fifty. The creditor cancelled their debts when they could not pay. Jesus then asked him who among the two would love the creditor more. Simon answered, ‘I suppose the one for whom he cancelled the greater debt.’

Turning to the woman Jesus said to Simon,

Do you see this woman? I entered your house; you gave me no water for my feet, but she has bathed my feet with her tears and dried them with her hair. You gave me no kiss, but from the time I came in she has not stopped kissing my feet. You did not anoint my head with oil, but she has anointed my feet with ointment. Therefore, I tell you, her sins, which are many, have been forgiven; hence she has shown great love.

This sinful woman was before Jesus’ host and indeed the people of the city a total write-off, cf. Lk 18:11. Hence, he doubted Jesus’ authenticity just because He allowed the woman to touch His feet.

Beyond how others saw the sinful woman, she willingly supplied those things the Pharisee would have done as a host in extraordinary way. Physically, she came with only an alabaster jar of ointment yet she was able to produce enough tears out of sorrow for her sins to bathe Jesus’ feet. And without a towel, she wiped them with her pride as a sign of her humility, cf. 1Cor 11:15. She did not measure less in love because she kept kissing those feet passionately because they are better than those that bring good news, cf. Rom 10:15. And selflessly she profusely poured ointment on those feet.

All these ‘hidden under many sins’ earned her the words she needed most: “Your sins are forgiven.” And, “Your faith has saved you, go in peace.” We must come back to God with our burdens of sin for pardon. Nobody is a total write-off before God. The saints we celebrate today understood this hence they insisted on readmitting the apostates and the schism.

Let us pray: May the God of compassion forgive us all our sins, – Amen.

Saint Cornelius and Saint Cyprian – Pray for us.