Homily (Reflection) for the Memorial of Saint Augustine, B.D., (28th August, 2021) on the Gospel and the Memorial 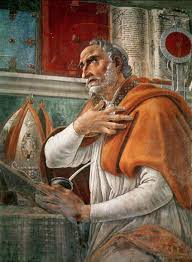 Saint Augustine of Hippo (13th November 354 – 28th August 430)[1] was son of Saint Monica. Although he was brought up a Christian and also one of the most intelligent men who ever lived, he spent many years in wicked living and in false beliefs (Manichaeism and neo-Platonism). Through the prayers of his mother and the preaching of Saint Ambrose, he became convinced that Christianity was the one true religion. But he was not converted immediately because he thought he could never live a pure life. On hearing that two men were converted after reading the life of Saint Anthony, he was filled with bitter sorrow and cried to God, “How long more, O Lord? Why does not this hour put an end to my sins?” He was baptized in 386, became a priest, a bishop, a famous Catholic writer, Founder of religious priests. Augustine is recognized as a saint in the Catholic Church, the Eastern Christian Church, and the Anglican Communion and as a preeminent Doctor of the Church. He overcame strong heresies, was very devout, practiced great poverty, and was also charitable. Augustine preached very often and prayed with great fervour right up until his death. He is the patron of the Augustinians, brewers, printers, theologians, the alleviation of sore eyes, and a number of cities and dioceses. Among his most important works are The City of God and Confessions. [2]

Topic: Put your talents into use.

The one talent was taken away and given to the one with ten. And the slave was thrown into the outer darkness, a place of weeping and gnashing of teeth.

Thought for today: Use your talents.

Let us pray: Lord, give us the grace to make the best use of all the talents you have given us – Amen.

Saint Augustine – Pray for us.