Homily (Reflection) for the Memorial of Saint Monica (27th August, 2021) on the Gospel and the Memorial 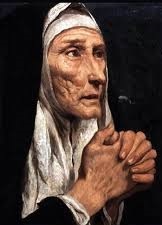 Saint Monica was born in 331 AD in Thagaste and was married to a pagan, Patricius at a very tender age. Her children were Saint Augustine (August 28), Navigius, and Perpetua. She endured her husband’s and her mother’s-in-law bad temper.  Although Patricius criticized her for her charity and piety, but he always respected her. She later won him and her mother-in-law to Christianity. She stopped Augustine from eating and sleeping in her house when he accepted the Manichean heresy and was living immoral life. Monica readmitted him after a vision that assured her that Augustine would return to the faith. She stayed too close to Augustine with prayers and fasting than he wanted. Augustine tricked her and left for Rome. On her arrival, she learnt that he had left for Milan. She did not give-up. In Milan, Augustine came under the influence of the bishop, Saint Ambrose, who also became Monica’s spiritual director. Saint Ambrose baptized Augustine and several of his friends at Easter, 387. Soon after, they left for Africa. She became ill and suffered severely for nine days and died in 387 AD in Ostia Antica. She is the patron Saint of Alcoholics, Married women, and Mothers.

Both the wise and the foolish have their lamps. They all became drowsy and slept. However, when they were called to meet the bridegroom, it became clear who is who. Truly, God “has qualified us to share in the inheritance of the saints in light”, cf. Col 1:12. But for one to be admitted, he/she must carry also the oil, one’s good deeds, cf. Eph 5:8-10. We are urged to become sons and daughters of light now by believing in Him, cf. Jn 12:35-36. Whoever fails is condemned like the foolish bridesmaids, cf. Mk 16:16; Jn 3:18-19. Lamp without oil is useless; it cannot give light, cf. Matt 5:15.

Thought for today: Do you have enough oil?

Let us pray: God, give us the grace to carry both our lamps and the oil – Amen.

Saint Monica – Pray for us.