Homily (Reflection) for the Memorial of Saint Pius X, PP., (21st August, 2021) on the Gospel and the Memorial 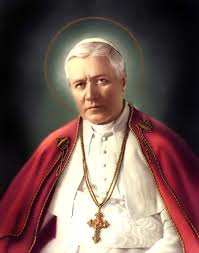 Pope Saint Pius X (2nd June, 1835 – 20th August, 1914) was born Giuseppe Melchiorre Sarto at Riese and became Pope in August 1903. His most important reform was to order the codification of the first Code of Canon Law. He was particularly devoted to the Blessed Virgin Mary. Pius X was the only pope in the 20th century with extensive pastoral experience and implementation at the parish level, which led him to favour the use of the vernacular language in teaching catechesis, while the encouragement for frequent reception of Holy Communion became a lasting innovation of his papacy. He vehemently opposed modernism, which claimed that Roman Catholic dogma should be modernized and blended with nineteenth-century philosophies. Pius X viewed modernism as an import of secular errors affecting three areas of Roman Catholic belief namely, theology, philosophy, and dogma. He combined within himself a strong sense of compassion, benevolence and poverty, but also stubbornness and a certain stiffness. He was the only pope in the 20th century who gave Sunday homilies in the pulpit every week. He was canonized on 29 May 1954.[1].

Topic: Between duty and honour.

Jesus urged His listeners to do and to follow what the scribes and the Pharisees taught because they occupied Moses’ seat. However, they should not follow their example because they did not practice what they taught.

They do all their deeds to be seen by others; for they make their phylacteries broad and their fringes long. They love to have the place of honour at banquets and the best seats in the synagogues, and to be greeted with respect in the marketplaces, and to have people call them rabbi.

The sacred office the scribes and the Pharisees occupied meant nothing to them. Hence, Jesus often rebuked them.

Each of us also occupies sacred office/s. I do not mean few in the religious life. These offices mean nothing to many. Hence many hustle for other ones they consider higher. Some mothers do not consider themselves fully mothers because they have not been termed ‘Life members,’ Mothers of this or that, even when there is nothing to justify such names. Fathers and youths are not different. Even priests are not fulfilled because they have not been made pastors, monsignori, bishops, and so on. All these are geared towards either real or imagined honour and very far from the duties.

We must be very careful. Jesus concludes, “All who exalt themselves will be humbled, and all who humble themselves will be exalted.” True honour comes after labour/duties. Saint Pius X we celebrate today did not accept the papacy just for the honour but did his best in fulfilling the duties.

Thought for today: You occupy a sacred office.

Let us pray: Lord, help us to realise how sacred our positions are and also give us the graces necessary to fulfil their demands – Amen.

Saint Pius X – Pray for us.