0 Sunday homilies 04:20
A+ A-
Print Email
Homily (Reflection) for the Twenty-Sixth Sunday of the Year (A) (27th September, 2020) on the Gospel Ezek 18:25-28; Ps 24:4-9. (R.v. 6); Phil 2:1-11 or 2:1-5; Matt 21:28-32. One day, a bible discussion group chose today’s gospel as the passage for the day. During their discussion, the leader encouraged the members to continue to strive despite the fact that many might have failed in so many ways. They listened with keen interest. In his effort to drive the message home, he used the life of St. Paul as an example. He told them how he started as Saul who fought against the Church aiming at destroying it to Paul who indefatigably fought for the same Church. Before he could finish, a young lady asked him whether those who canonized Paul knew about all that he did and he said yes. She maintained that they were ignorance of the life he lived. Every effort to make her understand the message fell on deaf ears. According to her, if Paul actually lived such life, those who made him a saint made that in error and should retrace their steps very fast.

Topic: Two sides of a saint 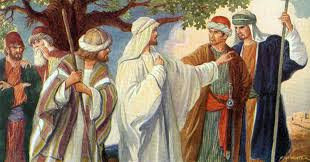 Jesus asked the chief priests and the elders of the people who wanted from Him the source of His power and authority, “What do you think? A man had two sons; and he went to the first and said, ‘Son, go and work in the vineyard today.’ And he answered, ‘I will not’; but afterward he repented and went” (Matt 21: 28-29). The man later said the same thing to the second who did not waste time to say yes but never did, cf. v. 30. Prophet Malachi reminds us that we are from the same father, cf. Mal 2:10. Jesus confirmed that we have one father, cf. Matt 23:9. So like the two sons in today’s gospel, we are of the same father and are all called to repentance. The preaching of Saint John the Baptist is not less important today. We must “Bear fruit that befits repentance” and stop parading ourselves either as members of the Church or as officeholders of one church or another, cf. Matt 3:8; Lk 3:8. We are to be known by our fruits and not by our names, cf. Matt 7:16, 20. Jesus warns, Truly I tell you, tax collectors and the prostitutes are going into the kingdom of God ahead of you. For John came to you in the way of righteousness and you did not believe him, but the tax collectors and prostitutes believed him; and even after you saw it, you did not change your minds and believed him (Matt 21:31-32). We read from the book of Ecclesiastes, “Surely there is not a righteous man on earth who does good and never sins” (Eccl 7:20). The first letter of Saint John also reads, “If we say that we have no sin, we deceive ourselves, and the truth is not in us” (1Jn 1:8). Based on these passages among others, it is evident that every saint has two sides, sinful and saintly. And every sinner can become a saint only that he/she must repent from saying no to the will of God to saying yes. These are evident in the first son who first said “I will not”, his sinful part. But the story did not end there because “afterward he repented and went”, his saintly part. cf. Matt 21: 29. God has communicated through His prophet what He wants of us, Say to them, As I live, says the Lord God, I have no pleasure in the death of the wicked, but that the wicked turn from his way and live; turn back, turn back from your evil ways; for why will you die, O house of Israel? (Ezek 33:11). God wants all to repent and avoid death, cf. 2Pt 3:9. Jesus came for sinners, cf. Matt 9:13; Mk:2:15; Lk 5:30. Saint Paul saw himself as the number one, cf. 1Tim 1:15. Just as the first son moved from saying no to their father’s will to being the one who did their father’s will, we can still be saints. Only we must start from now to say yes to the will of God. We must consider ourselves dead to sin and alive to God in Christ Jesus, cf. Rom 6:11. The target is for us not to sin but if any does sin, we have an advocate with the Father, Jesus Christ the righteous, cf. 1Jn 2:1. Bible Reading: Ezek 33:10-20; 1Tim 1:12-17; Jas 3:13-18; 2Pt 3:1-13; Eph 4:25–5:20. Thought for today: Does your profession manifest in your actions? Let us pray: Merciful Father, I humbly beseech you to help me leave my old ways and live entirely for you – Amen. You are free to share this reflection with others if you consider it worthy. For more homilies (reflections): Visit our website: www.thepulpitonline.com; Like us on Facebook: www.facebook.com/thepulpitonline; Follow us on Twitter: www.twitter.com/thepulpitonline; Join our WhatsApp Group via: +234 810 298 6313; Send us Email: thepulpitonline@gmail.com. To Contact and/or to support this ministry: Tel: +234 813 305 0302; Email: thepulpitonline@gmail.com. May God bless you all+
Posted by thepulpitonline.com
Share to: