0 Sunday homilies 23:12
A+ A-
Print Email
Homily (Reflection) for the Twenty-Fifth Sunday of the Year (A) (20th September, 2020) on the Gospel Is 55:6-9; Ps 144:2-3.8-9.17-18. (R.v. 18); Phil 1:20-24.27; Matt 20:1-16. One man hired a bricklayer and a labourer to work for him. As they were working, the labourer’s eyes were practically on his timepiece right from the time he set his foot on the site. The man who hired them was around almost all the time observing how the work was going. He noticed among other things that sometimes the bricklayer had to do the work of the labourer because he went to look at his timepiece and probably make some calculations and announcements. When the time came for the bricklayer and the labourer to be paid, the man who hired them was confused. As a result, he asked the labourer: “Although I hired you to assist the bricklayer but I do not know what to pay you for. The time you spent on your timepiece seems to be much longer than the time you used to assist the bricklayer. So, do I pay you for assisting the bricklayer or for being a timekeeper since you did more of the work of a timekeeper?” The labourer waited for some time and told him – “Well, you can pay me for either of them or better for both”. Topic: Do your work. 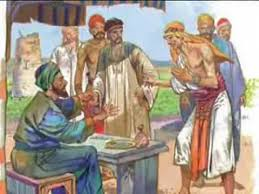 In the gospel, we see the parable of the owner of a vineyard and the labourers in the vineyard. These labourers were hired at different times. When the time for payment came, those who arrived first had thought they would receive something higher than others considering the fact that they worked the whole day, cf. Matt 20: 11-12. However, they all received the same wage (reward) – one denarius he had agreed to pay those who started the work early in the morning, cf. Matt 20: 2. As if rewarding all the labourers equally was not enough, the owner of the vineyard did not even consider paying those who came first before others, cf. Matt 20: 8-9. Because some worked from early in the morning until evening and some worked for just an hour, one will not be surprised why those who came first “… thought they would receive more …” (v. 10) and the subsequent grumbling, cf. v. 11. But in response to their grumbling the owner of the vineyard said: “Have I no right to do what I like with my own? Why would you be envious because I am generous?” (Matt 20: 15). According to this parable, from early in the morning until the last hour of the day, the owner of the vineyard kept going to the marketplace to hire labourers. Things that are striking in this parable include that the owner of the vineyard never went out without seeing labourers standing at the marketplace. Again, he never scolded any of them perhaps for not coming out on time. And lastly, he paid all of them equally. To understand this parable better, it is pertinent to consider these questions among others: Who is the vineyard owner and what is the vineyard? Again, what is the meaning of hiring labourers for his vineyard? The gospel according to Mark tells us how Jesus began his public ministry in Galilee saying: “The time is fulfilled, and the kingdom of God has come near; repent, and believe in the good news” (Mk 1:15). Through his preaching, he made disciples but he did not convert everybody just as the owner of the vineyard could not hire all the workers at once. Hence while about leaving the world he said to his disciples: “… Peace be with you. As the Father has sent me, even so I send you” (Jn 20:21). He sent his disciples into the world to “…make disciples of all nations, baptizing them in the name of the Father and of the Son and of the Holy Spirit, and teaching them to obey everything that I have commanded you” (Matt 28:19-20). These disciples even preached when Jesus was still physically present, cf. Mk 6:12 but especially after the resurrection as evident in the Acts of the Apostles. Yet, they did not succeed in converting everybody. Hence we still share in the work of preaching the good news till today. When Peter enquired of what would be their (the apostle’s) reward Jesus promised them heaven in these words: Truly I tell you, at the renewal of all things, when the Son of Man is seated on the throne of his glory, you who have followed me will also sit on twelve thrones, judging the twelve tribes of Israel (Matt 19:28). So, the one denarius is the kingdom of heaven. God from the Old Testament till today calls all of us to work for him. God continues to come to the marketplace through all the means he makes Himself especially His Word known for us to repent. Those who did the will of God even before Jesus through the time of Jesus, his disciples till today will surely have the same fair wage – the kingdom of heaven. No one is worthy of the kingdom of heaven. We only hope to enjoy the beatific vision because of the goodness of God. No matter how long one is at God’s service here on earth (in the vineyard), there is only one heaven for all who served Him well here on earth. If anyone can hearken to his call even today, the same heaven will be the reward. God gives to all men life and breath and everything and needed nothing from men, (cf. Acts 17:25) we are all equal before him. Bible Reading: Is 55:1-13; Matt 3:1-12; Lk 15:1-7; 8-10; 11-32. Thought for today: How good is your work? Let us pray: Lord, give me grace to work for you in your vineyard as a good labourer. May I not calculate how long I have worked or how you will reward me – Amen. You are free to share this reflection with others if you consider it worthy. For more homilies (reflections): Visit our website: www.thepulpitonline.com; Like us on Facebook: www.facebook.com/thepulpitonline; Follow us on Twitter: www.twitter.com/thepulpitonline; Join our WhatsApp Group via: +234 810 298 6313; Send us Email: thepulpitonline@gmail.com. To Contact and/or to support this ministry: Tel: +234 813 305 0302; Email: thepulpitonline@gmail.com. May God bless you all+
Posted by thepulpitonline.com
Share to: