Homily (Reflection) for the Solemnity of Saints Peter and Paul, Aps (29th June, 2020) on the Gospel and the Solemnity 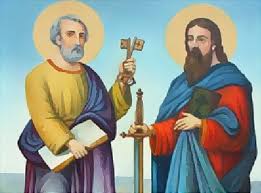 Today is the solemnity of the apostles Peter and Paul. Saint Peter was an apostle to the circumcised while Saint Paul was called to be an apostle to the uncircumcised, cf. Gal 2:7-9; Rom 11:13; Acts 9:15.
Saint Peter was son of Jonah (Matt 16:17) and brother of Saint Andrew (Matt 4:18; Mk 1:16; Jn 1:40). He was a native of Bethsaida, cf. Jn 1:44. There are two different accounts of his call. According to Matthew, Mark, and Luke, he was called alongside his brother by the Lord while fishing, cf. Matt 4:18-20; Mk 1:16-18; Lk 5:1-11. But according to Saint John, Andrew was the one who brought Simon to Jesus, cf. Jn 1:35-42. Jesus was the one who named Simon, Cephas (Peter) meaning rock, cf. Matt 16:18; Jn 1:42b. He is the patron saint of fishermen, net makers, and ship builders.
On the other hand, Saint Paul was a Jew and a native of Tarsus in Cilicia. cf. Acts 9:11. 21:39. 22:3. He was brought up in Jerusalem and studied under Gamaliel, cf. Acts 22:3. Saint Paul was a great persecutor of the Church and was very determined to destroy it, Gal 1:13. He was converted while on his way to Damascus with a letter from the high priest to arrest every Christian he could found. He was baptized by Ananias with the name Paul, cf. Acts 9:1-18. 22:6-16. 26:12-18. Saint Paul is the patron saint of Missionaries, Theologians, and Gentile Christians.
Saint Peter and Saint Paul were martyred in Rome. Saint Peter’s was in c. 64 AD and that of Saint Paul was in c. 67.
Topic: Beyond what others said.
There is a saying in Igbo language, “Nwata tofee onye mụrụ, a jụbazịa onye ka ọ na-anụ ma ọ bụ onye na-anụ ya” literally meaning that at a point in one’s life, the question will move from ‘whose child?’ to either, ‘whose husband or wife?” In the development of human beings, a time comes when people will expect to see what a person has done and/or is doing. Look at how the letter to the Hebrews expressed it, “For though by this time you ought to be teachers, you need someone to teach you again the first principles of God's word” (Heb 5:12; cf. 1Cor 3:2).
The letter to the Hebrews explains the importance of faith, “And without faith it is impossible to please him [God]. For whoever would draw near to God must believe that he exists and that he rewards those who seek him” (Heb 11:6). Where does faith come from? Saint Paul explained, “faith comes from what is heard, and what is heard comes by the preaching of Christ” (Rom 10:17). But faith should not be seen as something that comes automatically with hearing the gospel. Otherwise, the world would have been a better place.
In today’s gospel, Jesus first asked His disciples, “Who do people say that the Son of Man is?” Although they offered a lot of answers but the whole thing seem to have served as an introduction to the main question, “But who do you say that I am?” It was Peter who declared, “You are the Messiah, the Son of the living God.” And Jesus said to him,
Blessed are you, Simon son of Jonah.... I tell you, you are Peter, and on this rock I will build my church.... I will give you the keys of the kingdom of heaven, and whatever you bind on earth will be bound in heaven, and whatever you loose on earth will be loosed in heaven.
Faith is the product of the marriage between what is heard, read, and/or experienced and the inner person. Beyond what they said (ie, what one heard, read, and/or experienced) is one’s faith or lack of faith. Hence, Christ gives the power of becoming children of God only to those who received Him, and believed in His name, cf. Jn 1:12.
Beyond all you have heard, read, or experienced lies what, faith or lack of faith. Remember that in normal development of anything, at a point people would start to look for the essence of the thing in question. Saint Peter did not end up with what people said nor Saint Paul with the experience on his road to Damascus. It is very abnormal for one to remain at the level of what people say. God expects each of us to make his/her own confession. But it starts from what is really beyond what people say, faith or lack faith. Only he/she who is righteous through faith shall live, cf. Rom 1:17; Gal 3:11.
Bible Reading: Rom 10:5-21; Heb 11:1-40.
Thought for today: What lies beyond what you heard, read, and/or experienced?
Let us pray: Lord, we can do nothing without you. We humbly ask you for the gift of faith that will stand every test – Amen.
Saints Peter and Paul – Pray for us.
You are free to share this reflection with others if you consider it worthy.