Homily (Reflection) for the Memorial of Saint Charles Lwanga and Companions, Mm (03rd June, 2020) on the Gospel and the Memorial 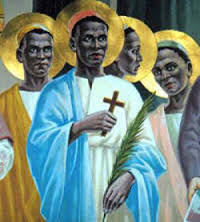 King Mutesa of Uganda peacefully received the White Fathers in 1879. Before long a number of the young pages in the king’s court had become Catholics. However, on the death of Mutesa, his son Mwanga, a corrupt man who ritually engaged in pedophilic practices with the younger pages, took the throne. When he murdered a visiting Anglican Bishop, his chief page, Joseph Mukasa, a Catholic who went to great length to protect the younger boys from the king’s lust, denounced the king’s actions and was beheaded on November 15, 1885. The 25 year old Charles Lwanga, a man wholly dedicated to the Christian instruction of the younger boys, became the chief page, and just as forcibly protected them from the king’s advances. On the night of the martyrdom of Joseph Mukasa, realizing that their own lives were in danger, Lwanga and some of the other pages went to the White Fathers to receive baptism. Another 100 catechumens were baptized in the week following Joseph Mukasa’s death. The following May, King Mwanga learned that one of the boys was learning catechism. He was furious and ordered all the pages to be questioned to separate the Christians from the others.  The Christians, 15 in all, between the ages of 13 and 25, stepped forward. They were bound together and taken on a two day walk to Namugongo where they were to be burned at the stake.  However, on the way, Matthias Kalemba, one of the eldest boys, exclaimed, “God will rescue me. But you will not see how he does it, because he will take my soul and leave you only my body.”  The executioners cut him to pieces and left him to die alone on the road. On June 3, 1886, the Feast of the Ascension, Charles Lwanga was separated from the others and burned at the stake. Just before the flames reached his heart, he looked up and said in a loud voice, “Katonda! – My God!,” and died. His companions were all burned together the same day all the while praying and singing hymns until they died. There were 22 protomartyrs in all and the last, a young man named John Mary, was beheaded by King Mwanga on January 27, 1887. These martyrs died between November 15, 1885 – January 27, 1887. They were beatified in 1920 and canonized by Pope Paul VI in 1964. St. Charles Lwanga is the patron saint of African Catholic Youth Action.[1]
Topic: After this world.
The Sadducees came to Jesus in today’s gospel and asked whose wife a woman who married seven brothers according to the Law of Moses would be in the resurrection, cf. Deut 25:5-10. Jesus said to them,
Is not this the reason you are wrong, that you know neither the scriptures nor the power of God? For when they rise from the dead, they neither marry nor are given in marriage, but are like angels in heaven.
God lamented that His children are dying for want of knowledge, cf. Hos 4:6. This knowledge must be properly understood as that of God which helps us live lives worthy of Him, cf. Col 1:9-10. This is because “the wisdom of this world is folly with God” (1Cor 3:19a). No one should allow his/her mind to be blinded by the god of this world to prevent him/her from seeing the light of the gospel of the glory of Christ, cf. 2Cor 4:4. This world is passing away, cf. 1Cor 7:31.
Bible Reading: 1Cor 3:1-19.
Thought for today: You are a child of resurrection.
Let us pray: May God help us to know Christ and the power of His resurrection – Amen (Phil 3:10).
Saint Charles Lwanga and Companions – Pray for us.
You are free to share this reflection with others if you consider it worthy.