Homily (Reflection) for the Thirty-Fourth Sunday of the Year (C) (24th November, 2019) on the Gospel 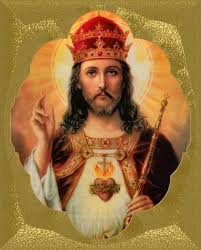