Homily (Reflection) for the Memorial of Saint Charles Borromeo, B., (04th November, 2019) on the Gospel and the Memorial 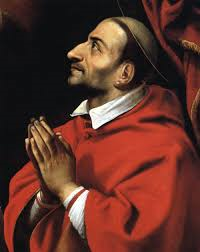 Saint Charles Borromeo (2nd October, 1538 – 3rd November, 1584) dedicated himself to a life of service to the Church at the age of 12. Life sped up for him after his uncle became Pope Pius IV on 25th December, 1559. The new pope invited him to Rome and appointed him a cardinal-deacon that came with the job of assisting and advising the pope. He was made a cardinal a month later. His appointment as the administrator of the Archdiocese of Milan in 1560 helped him decide that the Lord was calling him to the priesthood. Against the urge to preserve the family name after the death of his brother in 1562, he was ordained a priest on 4th September, 1563, consecrated a bishop on 7th December, 1563, and became the Archbishop of Milan on 12th May, 1564. He provided education to many clergy he saw as ignorant as a way of reforming the church, and also founded schools and seminaries, and stopped the selling of indulgences. Charles Borromeo went deep into debt feeding the starving people when famine struck Milan in 1576. Pope Paul V beatified him on 12th May, 1602, and also canonized him on 1st November, 1610. He is the patron saint of bishops, catechists, Lombardy, Italy, Monterey, California, cardinals, seminarians, spiritual leaders, and Sao Carlos in Brazil.[1]
Topic: Place of reward.
Jesus admonished His host today in these words,
When you give a luncheon or a dinner, do not invite your friends or your brothers or your relatives or rich neighbours, in case they may invite you in return, and you would be repaid. But ... invite the poor, the crippled, the lame, and the blind. And you will be blessed, because they cannot repay you, for you will be repaid at the resurrection of the righteous.
This challenges all of us because while doing charitable works, many target either those they think who will know the value or those who will value such works. Whatever we do for others are really done not for them but for their creator, cf. Matt 25:40,45.
The book of Proverbs reads, “Whoever is kind to the poor lends to the LORD, and will be repaid in full” (Prov 19:17). Being poor cannot be limited to deficient in material things but also in knowledge. That one does not value the good thing done for him/her should not worry us.
Let us go about doing good to both those who know the value and those who do not. We ought to be certain of the fact that God will certainly reward everyone for every deed, cf. Is 62:11. Saint Charles Borromeo we celebrate today went about doing good. He did not only use his own fortune but also went into debts to feed the hungry. We must remember always that we shall give account to God.
Bible Readings: Matt 25:31-46.
Thought for today: God will reward every person for everything.
Let us pray: May the good Lord give us the grace to go about doing good for all – Amen.
Saint Charles Borromeo – Pray for us.
You are free to share this reflection with others if you consider it worthy.