Homily (Reflection) for the Feast of Saint Thomas, Ap. (03rd July, 2021) on the Gospel and the Feast 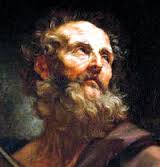 Saint Thomas was born a Jew. He was a dedicated but impetuous follower of Christ. Saint Thomas was the apostle who exhorted the other apostles to accompany Jesus on His visit to Lazarus which involved certain danger and possible death because of the mounting hostility of the authorities, cf. Jn 11:7-8.16. He was also the person who pleaded with Jesus that they did know neither the place nor the way to where He was going, cf. Jn 14:3-5. His refusal to believe when the other apostles told him that they had seen the risen Lord earned him the nickname, ‘doubting Thomas’, cf. Jn 20:24-25. Saint Thomas was present when Jesus appeared to some of His apostles by the Sea of Tiberias, cf. Jn 21:1-4.

Thomas’ problem was not unique to him. When the women who first witnessed Jesus’ resurrection told the eleven that Jesus is risen, they did not believe. It seemed to them like an idle tale, cf. Lk 12:1-11; Mk 16:9-11. Again, they did not believe the report of two others whom He appeared to, cf. Mk 16:12-13. So unbelief was common with all the apostles. Hence, Jesus was displeased with Thomas’ disbelief and lack of faith in today’s gospel just like those of others, cf. Mk 16:14.

We may have lost faith in God. Lack of faith manifests its ugly head in different forms. In some, it is in the form of moving from one church to another, in others moving from one man or woman of God to another. In some others, it is going to native doctors directly or indirectly, among so many other forms. Losing faith costs a lot. Moses was not able to lead the Israelites into the Promised Land because he broke faith with God, cf. Deut 32:51.

God is telling us today, “Do not doubt [any longer] but believe” (Jn 20:27). The Letter to the Hebrews defined faith as “the assurance of things hoped for, the conviction of things not seen” (Heb 11:1).

Thought for today: Have you ever broke faith with God?

Let us pray: Lord Jesus Christ, give us the grace to believe especially when it seems unreasonable to our human thinking so that we can say with the psalmist: “I kept my faith, even when I said, ‘I am greatly afflicted’”, (Ps 116:10) – Amen.

Saint Thomas the Apostle – Pray for us.