Homily (Reflection) for the Memorial of Our Lady of the Rosary, (07th October, 2019) on the Gospel and the Memorial 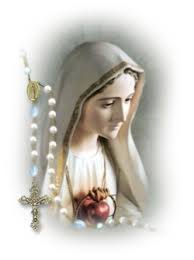 The feast of Our Lady of the Rosary is also known as Our Lady of the Most Holy Rosary. It was instituted by Pope Saint Pius V.[1] This Feast was formerly sometimes known as the Feast of Our Lady of Victory. It commemorates the decisive victory of the combined Christian fleet on 7th October, 1571 at the Battle of Lepanto, defeating an Ottoman fleet off western Greece.[2] Pope Saint Pius V attributed the victory to the intercession of the Blessed Virgin Mary, who was invoked on the day of the battle through a campaign to pray the Rosary throughout Europe.[3]
Topic: Go and do likewise.
A lawyer to test Jesus asked Him in today’s gospel, “...what must I do to inherit eternal life?” He answered him to love God and his neighbour as written in the law. To justify himself, he asked further, “And who is my neighbour?” Jesus told him a parable in which a man who travelled from Jerusalem to Jericho fell into the hands of robbers. They stripped him, beat him, and left him half dead and went away. A priest and a Levite saw him and passed by on the other side. It was a Samaritan who had pity on him, poured oil and wine on his wounds and bandaged them. He “put him on his animal, brought him to an inn, and took care of him.” He gave the innkeeper two denarii with the instruction to take care of the man and promised to pay whatever more he spent.
It is important to remind ourselves that the Jews and the Samaritans were enemies at the time of this parable. The action of this Samaritan can be likened to someone spending his/her resources on a professed enemy. But he must have seen beyond the man who fell into the hands of the robbers and was certain his good action was known to God who will repay everyone according to their deeds, cf. Is 59:18; Jer 25:14.
Dear brothers and sisters in the Lord, just like He said to the lawyer, Jesus is telling us today to “Go and do likewise” if we want to inherit eternal life. Love without boundaries. And just as Pope Saint Pius V asked for the intercession of the mother of God when the whole Europe was in danger, do not hesitate to do likewise in difficult situation.
Bible Readings: Jas 2:14-26.
Thought for today: Do good to everyone.
Let us pray: May God help us imitate the Good Samaritan – Amen.
You are free to share this reflection with others if you consider it worthy.