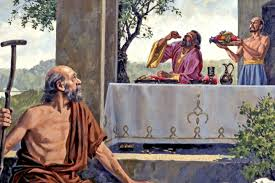 In today’s gospel is a figure that better depicts a wealthy king, “a rich man who was dressed in purple and fine linen and who feasted sumptuously every day” (Lk 16:19). Surprisingly at his gate was the opposite, “a poor man named Lazarus, covered with sores, who longed to satisfy his hunger with what fell from the rich man’s table; even the dogs would come and lick his sores” (Lk 16:20-21).
Lazarus died and was taken to the bosom of Abraham. The rich man also died and was buried. While being tormented in Hades, he looked up and saw Abraham with Lazarus by his side and cried, “Father Abraham, have mercy on me, and send Lazarus to dip the tip of his finder in water and cool my tongue; for I am in agony in these flames” (Lk 16:24).
Someone who had been feasting sumptuously every day now begs for a dip of finger in water. The only thing that looks like kindness in him is his prayer for his brothers lest they end up in the same place of torment. However Abraham told him that they have Moses and the prophets. Although he wanted someone to go from the land of the dead but Abraham replied, “If they do not listen to Moses and the prophets, neither will they be convinced even if someone rises from the dead.”
The LORD is the maker of both the rich and the poor, cf. Prov 22:2. He gives riches and honour. God rules over all and His hand makes great and gives strength to all, cf. 1Chr 29:12. Saint Paul also writes, “...all things are from God” (1Cor 11:12). And, “...from him and through him and to him are all things” (Rom 11:36).
God can do all things including making everybody rich, cf. Matt 19:26. Yet He did not make it so. We can infer a good number of reasons why He arranged things the way they are. But for the purpose of this homily, let us settle with the one in the prophecy of Blessed Simeon, “so that the inner thoughts of many will be revealed” (Lk 2:35). Although we may not say exactly why God arranged things as they are, but He has done all things well, cf. 1Tim 4:4. We cannot question God why He made one rich and the other poor, cf. Is 45:9.
The gospel did not tell us that the rich man did anything to Lazarus. In the words of the Psalmist he was being tormented in Hades because “he did not remember to show kindness” (Ps 109:16). The book of proverbs reads, “He who despises his neighbour is a sinner, but happy is he who is kind to the poor” (Prov 14:21). And whoever mocks the poor insults his Maker, cf. Prov 17:5.
God shows no partiality, cf. Gal 2:6; Eph 6:9. Through the prophet He commanded, “Let not the wise man glory in his wisdom, let not the mighty man glory in his might, let not the rich man glory in his riches” (Jer 9:23). Every gift is for the common good, cf. 1Pt 4:10. Hence, the book of Ecclesiastes reads, “When goods increase, they increase who eat them; and what gain has their owner but to see them with his eyes?” (Eccl 5:11).
There’s this story about heaven and hell. A devotee who wanted to know the difference between them was first led to hell. In hell, there was a banquet laid out with sumptuous food served on a long table. However, the elbows of all those seated at table could not be bent, and so it was impossible for them to put food into their mouths. This resulted in cursing and swearing all around. Heaven was no different. There too the devotee saw dishes laid out on a banquet table. Likewise, everybody’s elbows could not be bent. Interestingly, although heaven’s inhabitants couldn’t put food into their own mouths, they took food from the dishes and helped their neighbours to eat.[1]
We must make the best of the Lazarus and the rich man we are. Nobody is totally poor that he/she has nothing to offer. Everyone is rich and poor at the same time. And “He who is kind to the poor lends to the LORD, and he will repay him for his deed” (Prov 19:17). Again, “He who closes his ear to the cry of the poor will himself cry out and not be heard” (Prov 21:13). We conclude with these words of Saint Paul, “As for the rich in this world, charge them not to be haughty, nor to set their hopes on uncertain riches but on God who richly furnishes us with everything to enjoy” (1Tim 6:17).
Bible Reading: Jas 1:9-11; 1Tim 6:11-19.
Thought for today: Blessed are the merciful, for they shall obtain mercy (Matt 5:7).
Let us pray:             Lord, help us to know how rich we are and to employ our riches for our brothers and sisters – Amen.