Homily (Reflection) for the Twenty-Sixth Sunday of the Year (B) (30th September, 2018) on the Gospel


Ngozi, a little girl of about five years old had watched her mother with keen interest while preparing meals especially as she opens pots that has been on fire for a long time without using anything to protect her hands. One day, she enquired from her mother the secret behind the magic (act). In response, her mother told her that fire does not hurt elderly people. And without questing further, Ngozi assimilated her mother’s reply as it was given.
After some weeks, Ngozi was at their neighbour’s house playing with her mates while their mother was cooking at the kitchen. And the kitchen in which she was cooking has no walls so the children could see virtually everything going on. At a point, the woman opened the pot to see how the cooking was going but she could not bear the heat of the cover that made her to scream and threw the cover on the floor. Ngozi full of amazement asked her play mates (mostly children of the woman), ‘So your mother is still a little girl?’
Topic: Quo Vadis – Heaven or Hell? 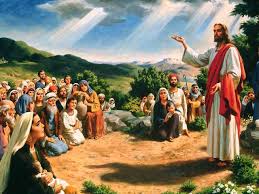 Today’s gospel can be divided into two: teaching about Another Exorcist using Jesus’ name and teaching about Temptations to Sin. But we shall concentrate on the second one – Temptations to Sin.
Often people offer assorted reasons why they indulged in one sin or another. In today’s gospel however, we see how grievous is the consequences of sin in Jesus teaching,
If your hand causes you to sin, cut it off. It’s better to enter eternal life with only one hand than to go into unquenchable fires of hell with two hands. If your foot causes you to sin, cut it off. It’s better to enter eternal life with only one foot than to be thrown into hell with two feet. And if your eye causes you to sin, gouge it out. It’s better to enter the Kingdom of God with only one eye than to have two eyes and be thrown into hell, ‘where the maggots never die and the fire never goes out.’ (Mk 9:43, 45, 47-48. LASB, NLT).
This teaching can be reframed in many ways for easier assimilation like: If earthly life, health, money, marriage, children, parents, friends, property, connection, and so on will cause you to sin, cut it/them out. It is better to enter the Kingdom of God without them than to have them and be thrown into hell fire, ‘where the maggots never die and the fire never goes out. Jesus warns,
For those who want to save their life will lose it, and those who lose their life for my sake will find it. For what will it profit them if they gain the whole world but forfeit their life? Or what will they give in return for their lives? (Matt 16:25-26).
Our lives here on earth affect others either positively or negatively. Hence, Jesus began the second part of the gospel in this way,
If any of you put a stumbling block before one of these little ones who believe in me, it would be better for you if a great millstone were hung around your neck and you were thrown into the sea (Mk 9:42).
The woman we saw in our introductory story could not endure the steam from her pot and the temperature of the cover of her pot, that are under her control. How can one endure the fires of hell? Jesus warns us of the fires of hell that were prepared for the devil and his angels, cf. Matt 25:41. Prophet Nahum rightly asked, “Who can stand before his indignation? Who can endure the heat of his anger? His wrath is poured out like fire, and the rocks are broken asunder by him” (Nah 1:6). It is therefore left for each and every one of us to choose where to go – heaven or hell.
Bible Reading: Matt 7:13-14; 10:16-33; 16:24-27; 2Pt 2:1-22.
Thought for today: Where are you preparing for – heaven or hell?
Let us pray: God, our Father, help us to live the life that will earn us the kingdom prepared for your blessed from the foundation of the world – Amen.
You are free to share this reflection with others if you consider it worthy.