Homily (Reflection) for the Twenty-Second Sunday of the Year (B) (02nd September, 2018) on the Gospel


One woman normally spins bitter leaves around her head while preparing bitter leave soup before putting them into the pot. After observing her with keen interest for some time, her children enquired why she does that and she told them that it prevents the leaves from making the soup bitter. They took that as a dogma based on the source of the information and that it has survived many generations. The children began to doubt the veracity of the ritual when she refused to prepare soup with bitter leaves that were not prepared. According to her, the ritual could only work after the leaves have been prepared at least a little. One day however the woman as she struggled to finish cooking on time used bitter leaves that were poorly prepared after observing the normal rituals. Unfortunately the soup turned out to be as bitter as whatever one can think of. Her children wondered and asked their mother why the ritual did not work. She told them that the preparation of the bitter leaves did not meet the required standard for the tradition work. Hum!
Topic: Traditions – God’s and the Elders. 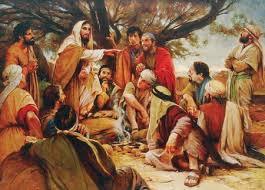 The New Webster’s Dictionary of the English Language (2000), defines tradition as “a cultural continuity transmitted in the form of social attitudes, beliefs, principles and conventions of behaviour etc deriving from past experiences and helping to shape the present” (p. 1046). Based on this, one cannot say that every tradition is bad. But in some cultures today, human traditions are generally seen as opposing to God’s commandments.
Among the Jews, tradition includes the following:
...never eat without washing their arms as far as the elbow; and on returning from the market place they never eat without first sprinkling [bathing] themselves. There are also many other observances which have been handed down to them to keep, concerning the washing of cups and pots and bronze dishes (Mk 7:3-4, TNJB).
Could it be that Jesus is against these – washing of arms, and bathing before eating, washing cups, pots, and bronze dishes? In the gospel according to Saint Luke when the people were surprised that He did not first wash His hands He said:
Now you Pharisees clean the outside of the cup and of the dish, but inside you are full of greed and wickedness. You fools! Did not the one who made the outside make the inside also? So give for alms those things that are within; and see, everything will be clean for you (Lk 11:39-41).
And in today’s gospel we also read: “You abandon the commandment of God and hold to human tradition” (Mk 7:8). Christians ought to live according to the commandments of God because we are new creatures in Christ, cf. 2Cor 5:17. This implies dying to sin, cf. Rom 6:11; 8:1. We are to be saved by living our lives as Christians not according to the human traditions. Saint Paul writes:
yet we know that a person is justified not by the works of the law but through faith in Jesus Christ. And we have come to believe in Christ Jesus, so that we might be justified by faith in Christ, and not by doing the works of the law, because no one will be justified by the works of law.  But if, in our effort to be justified in Christ, we ourselves have been found to be sinners, is Christ then a servant of sin? Certainly not! (Gal 2:16-17).
Saint Paul also warns in his letter to the Colossians: “See to it that no one takes you captive through philosophy and empty deceit, according to human tradition, according to the elemental spirits of the universe, and not according to Christ” (Col 2:8).
There is a story of a visitor who “was being shown around [during Communist times] by a party official. The visitor said, ‘Are you Catholic?’ and the official answered, ‘believing, but not practising.’ The visitor later asked, ‘Are you a communist?’ The official smiled and said, ‘Practising, but not believing’” (Fuller, G. (2010). Stories for all seasons. Mumbai: St Pauls, pp. 90-91). Christians ought to assess every human tradition with God’s and not the other way round as we see in many communities today. Just like the party official who took the visitor around, some Christians today believe in paganism but are not practicing it and others practice Christianity but do not believe in it. And many more are pagans both in belief and in practice yet they parade themselves Christians.
Like the woman in our introduction, many never question anything that is said to have been received from the elders. Joseph Addison rightly points out that “Tradition is an important help to history, but its statements should be carefully scrutinized before we rely on them” (The New Webster’s Dictionary of the English Language, p. QD-92). Every tradition must be subjected to the scrutiny of God’s commandments and whichever one that falls short must be dropped and those who do not oppose God’s commandments can be used as means of evangelization.
Bible Reading: Matt 23: 1-36; Lk 11:37-52; Gal 2:11-14.
Thought for today: What guides you – God’s or man’s traditions?
Let us pray: Our Father in heaven, give us your grace that will enable us follow wholeheartedly the dictates of your commandments – Amen.
You are free to share this reflection with others if you consider it worthy.