Put your talent/s into use: Saturday of the Twenty-First Week in Ordinary Time (II) (01st September, 2018).


Homily (Reflection) for Saturday of the Twenty-First Week in Ordinary Time (II) (01st September, 2018) on the Gospel
(B.V.M on Saturday, Opt Mem)


Topic: Put your talent/s into use. 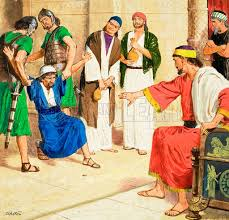 Jesus also compared the kingdom of heaven to a man who before going on a journey entrusted his property to his slaves. He gave five talents to one, to another two, and to another one, to each according to his ability. The one who received five and the other who received two traded with theirs immediately and doubled them. On the contrary, the slave who received one talent dug a hole and hid it. On the master’s return, the slave who received five talents and the one who received two received the same verdict, “Well done, good and trustworthy slave; you have been trustworthy in a few things, I will put you in charge of many things; enter into the joy of your master.” However, when the one who received one talent came forward, he reported,
Master, I knew that you were a harsh man, reaping where you did not sow, and gathering where you did not scatter seed; so I was afraid, and I went and hid your talent in the ground. Here you have what is yours.
The one talent was taken away and given to the one with ten. And the slave was thrown into the outer darkness, a place of weeping and gnashing of teeth.
Their master expected each to yield fruits according to the talents given, cf. Lk 12:48. Hence the one who doubled five talents and the other who doubled two received the same reward.
In the same vein, each of us is required to produce fruits according to the number of talent/s given. Have you produced any fruit?
Bible Reading: Lk 12:41-48.
Thought for today: Use your talent/s.
Let us pray: Lord, give us the grace to make the best use of all the talents you have given us – Amen.
You are free to share this reflection with others if you consider it worthy.
For more homilies (reflections):