Homily (Reflection) for the Memorial of Saint John Chrysostom, B.D., (13th September, 2021) on the Gospel and the Memorial 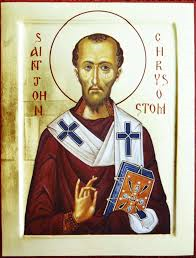 Saint John, named Chrysostom (golden-mouthed) on account of his eloquence was born in Antioch of Christian parents, about the year 344. He studied rhetoric under Libanius. In 374, he began to lead the life of an anchorite in the mountains near Antioch, but in 386 the poor state of his health forced him to return to Antioch, where he was ordained a priest. In 398, he was elevated to the See of Constantinople and became one of the greatest lights of the Church. He was exiled on account of the accusations against him from his enemies. The Pope remaining with him consoled him. He was later banished further to the very extremity of the Empire (Pythius). He died on his way there on September 14, 407.[1] Saint John is the patron saint of Constantinople, education, epilepsy, lecturers, orators, and preachers. He is venerated in Roman Catholic Church, Eastern Orthodoxy, Oriental Orthodoxy, and Church of the East.[2]

A centurion in Capernaum who loves the Jews and built a synagogue for them had a slave he valued highly, who was ill and close to death. He sent some Jewish elders to ask Jesus to come and heal his slave. Jesus was already near to his house, when he sent friends to say to Jesus, “Lord, do not trouble yourself, for I am not worthy to have you come under my roof; therefore I did not presume to come to you. But only speak the word and let my servant be healed....” Jesus was amazed and said to the crowd following Him, “I tell you, not even in Israel have I found such faith.” His slave was healed instantly.

The gospel describes this centurion as both wealthy and influential person. Yet he was an epitome of so many virtues. His love was boundless. And this was far from mere words: he erected a synagogue for the Jews and sought for the cure of a slave he could afford so many of them. He taught us that one’s value is far from his/her social status. His humility was heroic. He considered himself unworthy to meet Jesus. Hence, he sent the Jewish elders to meet Jesus and also prayed through friends that He should not enter under his roof. His faith even surprised Jesus.

All we have are gifts, cf. 1Cor 4:7. God’s blessings demand much humility lest they turn to their possessors’ perdition, cf. Jas 5:3-6. Nobody takes any out of this world, cf. Ps 49:16-17. They are to be extended to more and more people to increase thanksgiving, to the glory of God, cf. 2Cor 4:15. We are expected to emulate our Lord Jesus Christ, who became poor, so that we might become rich, cf. 2Cor 8:9.

Thought for today: ...all things were created through him and for him (Col 1:16).

Let us pray: God open my eyes to see the worth of every creature – Amen.

Saint John Chrysostom – Pray for us.