Homily (Reflection) for the Memorial of Saint Benedict, Abb (11th July, 2020) on the Gospel and the Memorial 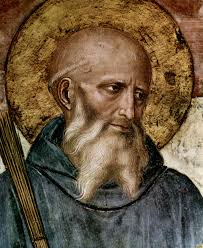 Saint Benedict of Nursia (c. 480 – c. 547), twin brother of Saint Scholastica was born into a distinguished family in central Italy, and was drawn to the monastic life early in life. Some monks chose him as their leader, but were dissatisfied with his strictness. He built what became one of the most famous monasteries in the world—Monte Cassino. His rule for his monks is known as “Rule of Saint Benedict”. He is venerated in the Catholic Church, the Eastern Orthodox Churches, the Oriental Orthodox Churches, the Anglican Communion and Old Catholic Churches. He is the patron saint of Europe and students, and the father of Western Monasticism.
Topic: Facts often forgotten.
As we proclaim Jesus Christ as Lord, many have in mind just the miracle-working and glorified Jesus Christ. We often forget that this same Jesus Christ was born in a manger (cf. Lk 2:7), had a carpenter; not a furniture-maker for a guardian (cf. Matt 13:55), and was not ashamed to take-up after His guardian (cf. Mk 6:3). He could not afford a shekel for His and His disciple’s tax (cf. Matt 17:27), had nowhere to lay His head (cf. Matt 8:20; Lk 9:58), was rejected by His people (cf. Matt 13:54-57), accused of being possessed and casting out demons with evil power, (cf. Mk 3:22; Matt 12:24; Lk 11:15), and could not afford a donkey for His journey (cf. Mk 11:1-3). Jesus Christ died the most shameful death, (cf. Gal 3:13), buried in another’s tomb, (cf. Matt 27:57-60) and a lot more facts.
This is the Jesus Christ who is our Teacher and our Master. In today’s gospel He addressed His disciples further on what they would expect in the world,
A disciple is not above the teacher, nor a slave above the master; it is enough for the disciple to be like the teacher, and the slave like the master. If they called the master of the house Beelzebul, how much more will they malign those of his household!
Juxtaposing the life Jesus lived and that of many Christians including some leaders today raises a lot of questions. We are in the world but not of the world, cf. Jn 15:19; 17: 11.14.16. Hence Saint Paul wrote, “our commonwealth is in heaven” (Phil 3:20). Our rejoicing must be that our names are written in heaven, cf. Lk 10:20. We need to ask ourselves some basic questions to be certain that we follow Jesus Christ of Nazareth crucified on the cross whom we proclaim with our lips. Saint Benedict who was hated by men for following Him is today in heaven. May we follow his example.
Bible Reading: Phil 3:12-21.
Thought for today: When faced with difficulties, remember Jesus, cf. Heb 4:15.
Let us pray: Lord, give us the grace to follow you with our whole heart – Amen.
Saint Benedict – Pray for us.
You are free to share this reflection with others if you consider it worthy.