Homily (Reflection) for the Feast of Our Lady, Mother of Africa (30th April, 2020) on the Gospel and the Feast


North Africa, the land of Saints Monica, Augustine, among others, as part of Roman Empire began to become Christian in the 3rd century under Emperor Constantine. It remained Christian until the Arab invasions in later centuries. The French re-established themselves early in the 19th century. 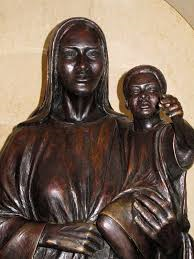 The first bishop, Bishop Dupuch found it impossible to build a church because the local population was hostile to the French. He went back to France for assistance. The Sodality of Our Lady in Lyon offered to the bishop a bronze statue of the Immaculate Conception with the understanding that she would be the Protectress of both the Mohammedans and the natives. It was brought from France in 1840 and was entrusted to the Cistercian monks of Staueli. Later, Cardinal Lavigiers, founder of the White Sisters, enshrined it in the new basilica at Algiers, where in 1876 the image was crowned. This bronze statue, very dark in colour, is known as Our Lady of Africa.
Pilgrims began to come to venerate the image where the lame, the blind, and the crippled were miraculously healed, and sailors came also to beg for protection of their long and perilous voyages. At this and other North African shrines the veneration given to Mary by Mohammedans is very marked. This feast commemorates the crowning of the Algiers statue.[1]
Topic: Thank God for Mary.
In today’s gospel, Mary, Jesus, and His disciples were invited to a wedding. When the couple ran out of wine, Mary said to Jesus, “They have no wine.” Although Jesus said to her, “‘Woman, what concern is that to you and to me? My hour has not yet come.’ His mother said to the servants, ‘Do whatever he tells you.’” Jesus told the servants to fill the six stone jars standing there with water. And when they had done so, He told them to take some to the chief steward. When he tested the water turned into wine he said to the bridegroom, “Everyone serves the good wine first, and then the inferior wine after the guests have become drunk. But you have kept the good wine until now.”
Have you ever thought of what would have been the fate of the couple if they had left Mary out? Just because they invited her, she noticed that they were in difficulty and asked her Son to assist them. Remember, His time had not come yet she knew that He would not disobey her because He decreed, “Honour your father and your mother” (Ex 20:12; cf. Matt 15:4. 19:19).
Dear friends, Mary is the second best gift from God after her Son, Jesus Christ. In line with Jesus’ words to the Samaritan woman, ‘If we know this gift of God called Mary, we need not to be told that we ought to thank God every moment for her’, cf. Jn 4:10. God has done and is still doing so much through Mary as we have seen in the origin of today’s feast and in the gospel. Finally, if God is truly our Father, we ought to love Mary because she is our mother, cf. Jn 8:42; Rev 12:17. I pray you to read your bible and see who actually Mary is.
Bible Reading: Acts 1:6-14; Rom 16:6.
Thought for today: If God is our Father, who is our mother?
Let us pray: May the Holy Spirit of God help us to understand the gift God bestowed on us in Mary – Amen (cf. 1Cor 2:12).
Our Lady, Mother of Africa – Pray for us.
You are free to share this reflection with others if you consider it worthy.