0 Solemnities and Feasts, Sunday homilies 04:40
A+ A-
Print Email


Homily (Reflection) for Easter Sunday (12th April, 2020) on the Gospel and the celebration


There is a story of a man who was picked up in a gutter on Good Friday. He left his house very early in the morning. His wife, children, and friends found it very difficult to believe that it was the man that they saw in such a state. Although he was notorious for taking too much alcohol but all through the period of Lent he was a different man. He did not test alcohol at all the whole period of Lent. When he regained consciousness they asked him why he took to drinking again. And he told them that the joy in his heart was unimaginable when the priest said on Maundy (Holy) Thursday that the forty (40) days of Lent were over. He went on to tell them that he needed to refill because his body lacked liquid (alcohol). According to him, his body was badly dehydrated all the period of Lent that at a point he was thinking if the Lent would never end.
Topic: After Lent, What Next? 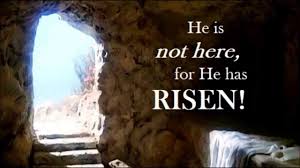 Mary had gone to the tomb on the first day of the week may be to meditate on the passion and death of Christ. When she saw that the stone had been removed from the tomb the gospel reads: “... she ran and went to Simon Peter and the other disciple, the one whom Jesus loved, and said to them, ‘They have taken the Lord out of the tomb, and we do not know where they have laid him’” (Jn 20:2). Mary Magdalene like others thought that the story had ended. But our salvation story did not end with the suffering and death of Christ Jesus. Hence, St. Paul in his first letter to the Corinthians wrote:
If there is no resurrection of the dead, then Christ has not been raised; and if Christ has not been raised, then our proclamation has been in vain and your faith has been in vain. If Christ has not been raised, your faith is futile and you are still in your sins. Then those also who have died in Christ have perished. If for this life only we have hoped in Christ, we are of all people most to be pitied (1Cor 15:13-14, 17-19).
For forty days, we were in the period of Lent. All these while, not even alleluia did come out of our mouths consciously. It is during the period of Lent that one will come to know that alleluia is not all that common. But now that it is over what is the next thing? The answer to this depends on the meaning or one’s understanding of Lent. I know that some might wonder what on earth led us to discuss Lent on Easter day after having just spent forty (40) days excluding Sundays in it. Easter comes after Lenten period. And during the period of Lent, many people did a lot of good deeds – almsgiving, abstaining from vices, devotions, among others. Some even denied themselves many things that are not sinful just for God.
Every Christian who took part in the Lenten season can be better seen as a graduate although without any paper-certificate. The period of Lent is a school, a period of training. In this school just like in every other form of school, the students gather as much skills as possible for the life after school. Graduates come out with new skills and in the same vein Christians must have gathered a lot of skills (virtues) during Lent. We should not allow any of these virtues to leave otherwise we risk spending forty days in the wilderness without anything to show for it just like the man we saw in the introductory part of this homily who waited for the Lent to be over so as to go back to drinking. Saint Peter warns,
Discipline yourselves, keep alert. Like a roaring lion your adversary the devil prowls around, looking for someone to devour. Resist him, steadfast in your faith, for you know that your brothers and sisters in all the world are undergoing the same kinds of suffering. And after you have suffered for a little while, the God of all grace... will himself restore, support, strengthen, and establish you (1Pt 5:8-9).
Christ suffered, died and resurrected for us to benefit as well as to imitate, cf. 1Pt 2:21. We all are to resurrect cf. Acts 24:15, but the destination is determined by the quality of lives we live now: “those who have done good, to the resurrection of life, and those who have done evil, to the resurrection of judgment” (Jn. 5:29). Do not celebrate the end of Lent by going back to your old ways of life. We are to witness to the resurrection of Christ with our lives and perhaps our words if it is necessary, cf. Acts 1:22. The struggle is not yet over until it is over. We are still in the battle field (world).
Bible Reading: 1Cor 15:12-34; Heb 4:1-13; 1Pt 5:6-11.
Thought for today: Prepare now for your resurrection (cf. Jn. 5:29).
Let us pray: Risen Christ, help us live the life that will lead us to the resurrection of life and not to judgement – Amen.
Happy Easter to you all.
You are free to share this reflection with others if you consider it worthy.