Pull Down the Walls: Third Sunday of Lent (A)

Topic: Pull Down the Walls.
The story of the wall of Jericho is a well-known one. The gate was shut up from inside and from the outside because the people of Jericho did not want the people of Israel to come in. Nobody could either go in or out, cf. Josh 6:1. What would have happened to anyone who needed something that could not be found in the city of Jericho for survival the period the gates were shut? 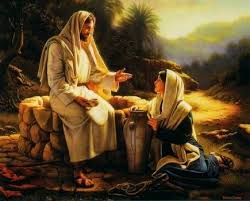 In the gospel reading, we saw another wall between the Jews and the Samaritans. Hence, the woman was surprised that Jesus, a Jew, could ask her for a drink: “You are a Jew, and I am a Samaritan woman. Why are you asking me for a drink?” (v. 9, NLT). The Jews refused to have anything to do with the Samaritans.
In his Letter to the Galatians Saint Paul wrote that Christians are all sons of God through faith, cf. Gal 3:26. In the words of our Lord Jesus Christ, sons of God (Christians) are peacemakers, cf. Matt 5:9. Jesus also asks us to make peace quickly with those who accuse us, cf. Matt 5:25. And prophet Malachi queried, “Have we not all one father? Has not one God created us? Why then are we faithless to one another, profaning the covenant of our fathers?” (Mal 2:10).
What God commands us to do as His children include the following:
When you come upon your enemy’s ox or donkey going astray, you shall bring it back. When you see the donkey of one who hates you lying under its burden and you would hold back from setting it free, you must help to set it free (Ex 23:4-5).
We read in the Book of Proverbs: “Do not rejoice when your enemy falls, and let not your heart be glad when he stumbles” (Prov 24:17). Again, “If your enemy is hungry, give him bread to eat; and if he is thirsty, give him water to drink” (Prov 25:21). In the gospels we read: “… love your enemies … and you will be sons of the Most High; for he is kind to the ungrateful and the selfish” (Lk 6:35); “… Love your enemies, do good to those who hate you” (Lk 6:27); “… Love your enemies and pray for those who persecute you” (Matt 5:44).
The period of Lent is a special time for pulling down the walls of enmity we build here and there starting from the ones among Christians. It is always very painful seeing walls among Christians. The Psalmist wrote:
It is not enemies who taunt me – I could bear that; it is not adversaries who deal insolently with me – then I could hide from them. But it is you my equal, my companion, my familiar friend, with whom I kept pleasant company; we walked in the house of God with the throng” (Ps 55:12-14).
In today’s gospel, Jesus rightly replied the Samaritan woman: “If you knew the gift of God, and who it is that is saying to you, ‘Give me a drink,’ you would have asked him, and he would have given you living water”. Jesus had something very much greater than the drink he asked of the woman. In the same vein, those people we have walls against might have keys to our lives, health, success, salvation, peace, joy, and so on. Why not pull the wall down and experience these?
An only child of his parents had a fatal accident that affected some of his internal organs. He had lost great quantity of blood before help could come. He needed to be operated upon but the quantity of blood he had would not be enough. His blood group was rare in the area and could neither be found in the hospital’s blood bank nor in the blood banks around.
A young man with the same blood group got to know about it and was willing to save this life. He made his intention known to his parents but they objected to the idea because the two families were in enmity. He left the house for the hospital without telling anybody where he was going to. On his arrival, he met the parents of the one who needed blood. They accused him of being a spy who wanted to know whether the child was already dead, poured abusive words on him and could not even allow him to make his mission known. His pleas fell on deaf ears.
Days later, he decided to write them since he could not be allowed to speak. In the letter he stated his willingness to give his blood to save the child. However, by the time they got the letter the child was dead on account of the inability to get the required blood.
God did not just want us to love our enemies but assures us: “… if you hearken attentively to his voice and do all that I say, then I will be an enemy to your enemies and an adversary to your adversaries” (Ex 23:22). Hence, Saint Paul wrote: “Beloved, never avenge yourselves, but leave it to the wrath of God; for it is written, ‘Vengeance is mine, I will repay, says the Lord’” (Rom 12:19, cf. Deut 32:35, Heb 10:30). God requires of us: “… to do justice, and to love kindness, and to walk humbly with your God” (Mic 6:8). God wants us to be everyone’s neighbours and not enemies, cf. Lk 10:25-37.
Bible Readings: Josh 6:1ff; Ex 23:1-9; Lk 6:27-36; 10:25-37; Rom 12:9-21; Ps 55:1-14.
Thought for today: Do you know that God wants you to pull down those walls?
Let us pray:
Merciful Father, your love for us is incomparable. May we as your children learn how to love others especially the most difficult ones – Amen.
You are free to share this reflection with others if you consider it worthy.