Being a Friend of God: Fifth Sunday of Lent (A)


After Paulinus and Paulina had married for a while, Paulinus sought and got his wife’s consent to search for a greener pasture in the city. God blessed his efforts. However, when he returned to take Paulina to the city she had been married to another man, Paul for about two years. That was in obedience to her parents with whom she was staying and that of some of her friends. Paul was living in the city and was also well-to-do. But later, he experienced lots of setbacks in his business that they relocated to the village. And with time the love they have for themselves began to dwindle seriously to the extent that Paulina was sometimes beaten up by Paul. On the other hand, God continued to bless Paulinus who later got married to another woman with children.
Topic: Being a Friend of God.
Do you know that God loves you? Certainly, some may find it difficult saying yes to this because of the situation in life. However, the truth is that God loves each and every one of us no matter the condition one is in, cf. Jn 16:27. The problem may be one expecting God to do what he/she wants, when he/she wants them, where he/she wants, and as he/she wants them. Every condition may be a trial but we ought to stand firm just like the Galatians did in the face of Paul’s condition, cf. Gal 4:14. 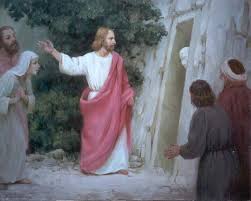 We read in today’s gospel that when Lazarus was ill, Mary and Martha sent this message to their family friend: “Lord, he whom you love is ill”. Lazarus and his sisters being Jesus’ beloved, one would think that Jesus would have set out immediately for Bethany to prevent him from experiencing death but he did not. Instead he said: “This sickness does not lead to death; rather it is for God’s glory, so that the Son of God may be glorified through it” (Jn 11:4).
Just like Lazarus’ illness was for the manifestation of the glory of God, there is no condition one is in this life that will be for the contrary. Paul in his letter to the Romans wrote: “and if children, then heirs, heirs of God and fellow heirs with Christ, provided we suffer with him in order that we may also be glorified with him” (Rom 8:17). Some of the questions that came to me while reflecting on this gospel include: What would have happened if Mary and Martha had no faith and sought for the cure of their brother’s illness somewhere else that showed their lack of faith in their friend, Jesus? Or if they had put something for him in the casket or grave so that he would avenge his death? Again, what would have happened if Jesus met a native doctor or more doing incantations and other things that go with it at his grave?
There are some important questions for us because at the face of difficulties we do think that God would not be able to deliver us. Sometimes it does seem that we want to deliver ourselves first and then later come back to God. When the people of Israel complained for lack of meat and God said that he would give them meat Moses thought like some of us. He was like reminding God how many they were and God asked him a question that is still relevant today: “… Is the LORD’s power limited? …. (Num 11:23). Again, in the prophet Isaiah God asked again:
Why, when I came, was there no man? When I called, was there no one to answer? Is my hand shortened, that it cannot redeem? Or have I no power to deliver? Behold, by my rebuke I dry up the sea, I make the rivers a desert; their fish stink for lack of water, and die of thirst (Is 50:2).
The book of Proverbs reads: “He who loves pleasure will be a poor man; he who loves wine and oil will not be rich” (Prov 21:17). In the same vein, he who looks for God because of miracles will never be a true disciple. We are expected to glorify God by proving that we are really Jesus’ disciples by bearing much fruit, cf. Jn 15:8. Jesus first glorified God on earth by accomplishing his mission, cf. Jn 17:4. It is by believing in God and doing his will that we will save ourselves for the glorious resurrection, cf. Mk 16:16, Jn 14:23. Always remember this, God is ready and willing to vindicate us but when he comes, will he find faith, cf. Lk 18:8. Paulina suffered in the hands of Paul because she thought that she had found a better husband in him and dropped Paulinus. In the same vein, if we do not stick to our marriage with God we will suffer eternally in hell fire. The book of Job reads, “Behold, happy is the man whom God reproves; therefore despise not the chastening of the Almighty” (Job 5:17). Again, we also read, “...the LORD reproves him whom he loves, as a father the son in whom he delights” (Prov 3:12).
Dear one in the Lord, if you are no longer married to God, do not let this Lent pass by. Come back. God is ever ready to accept us back.
Bible Readings: Is 50:1-3; Jn 12:27-36; Jas 2:14-26; 4:1-10.
Thought for today: Do you know that you are God’s friend and that he loves you so much?
Let us pray:
My God and my friend, may I understand what it means to be your friend. Help me always to live my life as a sincere friend of yours by doing what you want, how you want them, when you want them, and where you want them – Amen.
You are free to share this reflection with others if you consider it worthy.