Homily (Reflection) for the Memorial of Saint John of the Cross, P.D., (14th December, 2019) on the Gospel and the Memorial 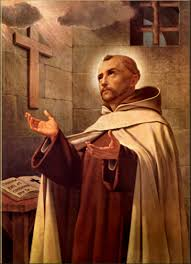 Saint John of the Cross was born in Spain in 1542. He became a Carmelite and was ordained a priest in 1567. Saint Theresa of Avila encouraged him to undertake the reform of his Order. He was strenuously opposed and suffered many trials and setbacks. He led a life of prayer which bore fruit in a number of writings that are classics of the mystical life which include The Ascent of Mount Carmel, The Dark Night of the Soul, The Spiritual Canticle, and The Living Flame of Love. His outstanding homilies, austerity of life, poetic genius and charity remain living examples.[1]
Topic: Problem of Recognition.
There is an Igbo adage that a slave ought to know that he or she will be buried just the same way slaves are buried. While Jesus and His disciples were descending from the mountain after His transfiguration, they raised a question on why the scribes said that Elijah would come first. Remember that Jesus also answered this question in the gospel of Thursday of the second week of Advent, Matt 11:11-15.
And Jesus told them that Elijah had already come and they did with him what pleased them because they did not recognise him. In the same vein, that the same fate awaits Him who is the long awaited Messiah. I believe you still remember the story of the monk sent by the bishop to a monastery as their new abbot who was subjected to the most menial jobs in the monastery until he was discovered?
Please, be very careful the way you treat that man or woman, boy or girl, and so on you meet today and all the days of your life because you may not have known him or her. Again, if others look down on you, do not grudge or fight over it? No need for any of them. Just face your God and do your best. It is God who “raises up the poor from the dust; he lifts the needy from the ash heap, to make them sit with princes and inherit a seat of honour. For the pillars of the earth are the LORD's, and on them he has set the world” (1Sam 2:8; cf. Ps 145:14). He will surely raise you. Did someone ask when? Certainly, at the appointed time, cf. Gen 18:14; 1Pt 5:6. Saint John of the Cross despite the opposition and setbacks yet he worked and God crowned his efforts.
Bible Reading: Matt 18:1-5.
Thought for today: Be careful how you treat others.
Let us pray: May we see beyond the creatures we meet to He who made them all – Amen.
Saint John of the Cross – Pray for us.
You are free to share this reflection with others if you consider it worthy.