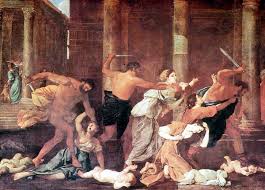 The Feast of Holy Innocents commemorates the children Herod the Great, the Roman-appointed King of the Jews killed. He directed the Magi from the east who were searching for Jesus to Bethlehem, and requested them to let him know the newborn king when they found him. But they were warned in a dream not to go back to Herod. Saint Joseph also took the child and his mother to Egypt as directed by an angel. And when Herod realized that he had been tricked by the Magi, he was furious, and gave orders to kill all the boys in Bethlehem and its vicinity who were two years old or under, in accordance with the time he had learned from the Magi. The number of the infants is not certain and some historians even doubt its authenticity. The Holy Innocents, although Jewish, have been claimed as martyrs for Christianity[1].
Topic: Herod’s anger.
In the gospel according to Saint Matthew, King Herod was frightened when he heard that a king was born, cf. Matt2:3. He saw him as a rival. As a result, he ordered for the massacre of every male child in and around Bethlehem who were 2 years old or under as we read in today’s gospel.
These Holy Innocents committed no offence. And in fact, no offence was committed. Yet they were killed in such gruesome manner without any atom of mercy.
May be you have suffered Herod’s anger in one way or another. And surely it was too painful because of the fact that you are innocent. Or even you may still be suffering or nursing such pains.
On the other hand, has anybody suffered Herod’s anger in your own hands? And what have you done about it or hope to achieve through that?
If you have suffered unjustly or still suffering like the Holy Innocents, look unto God. And if others have suffered or are still suffering in your hands, make amends today. It is very important. Remember, God is coming to reward all according to what each has done, cf. Rev 22:12.
Bible Reading: Eph 4:25 – 5:2.
Thought for today: Has anyone suffered unjustly in your hands?
Let us pray: May God help us bring healing to all those who suffer – Amen.
You are free to share this reflection with others if you consider it worthy.