Homily (Reflection) for the Memorial of Saint Irenaeus, B.M (28th June, 2018) on the Gospel and the Memorial 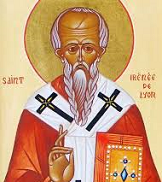 Saint Irenaeus, was Bishop of Lugdunum in Gaul, then part of the Roman Empire (now Lyon, France). He was an early Church Father and apologist, and his writings were formative in the early development of Christian theology. His best-known book, Adversus Haereses (Against Heresies) is a detailed attack on Gnosticism, which was then a serious threat to the Church. His polemical work is credited for laying out the orthodoxies of the Christian church, its faith, its preaching and the books that it held as sacred authority.[1]
Topic: Further warning.
Today’s gospel is the continuation of Jesus’ warning in yesterday’s gospel. It is made up of two teachings: self-deception, and hearers and doers of the word.
Jesus warned in today’s gospel that the ability to perform miracles and/or claims of miracles is not true yardstick for discerning spirits. Hence, many will say on the last day, “Lord, Lord, did we not prophesy in your name, and cast out demons in your name, do many deeds of power in your name?” And Jesus will declare to them, “I never knew you; go away from me, you evildoers.” Recall that the wise men and sorcerers of Egypt performed miracles just like Aaron did, cf. Ex 7:8-11. Again, Paul and Silas were met by a slave girl at Philippi who had a spirit of divination through which her owners had made much gain by soothsaying. Although that spirit appeared harmless but Paul cast it out because it was not of God, cf. Acts 16:16-18; Matt 12:22-26.
The true yardstick is in doing the word of God. We all face the same challenges but colossal failure awaits those who do not practise the word of God. In line with the second part of the gospel, Saint James cautions,
But be doers of the word, and not merely hearers who deceive themselves. For if any are hearers of the word and not doers, they are like those who look at themselves in a mirror.... But those who look into the perfect law, the law of liberty, and persevere, being not hearers who forget but doers who act – they will be blessed in their doing (Jas 1:22-25).
We celebrate Saint Irenaeus not because he performed miracles but because he did the will of God. Whoever wants to make heaven must follow his example.
Bible Reading: Jas 1:19-27; 2:14-26.
Thought for today: Are you a hearer or a doer of God’s Word?
Let us pray: May God help us to live out His Word always – Amen.
Saint Irenaeus – Pray for us.
You are free to share this reflection with others if you consider it worthy.